The man behind the Moto Talbott Museum is Robb Talbott, and his love of motorcycles stems from his first bike – a Honda Trail 55. After a long career in wines, Robb was gifted a copy of Art of the Motorcycle in 1998. Despite his passion for bikes, Mr. Talbott had never thought of them as art…until he read that book. It completely changed how he looked at the bikes we love, and in 2001 he started collecting them.

Robb opened up a museum in 2016 in Carmel, California, and when I went up for the Quail that year he was kind enough to have me stop by before the museum had officially opened. I asked Robb to talk about three of his favorite bikes and my friend Aaron Schasse created a “sneak preview” video:

Four years later, the museum is still going strong – though it’s unfortunately on a temporary hiatus due to COVID-19.

But about a month ago, my buddy Charles Fleming asked if I wanted to go on a little weekend ride up to Monterey to check in with Robb and enjoy some fine motorcycling roads along the way. Indeed I did, and I thought it would be the perfect excuse to test a bike I’ve wanted to ride for years – the MV Agusta Turismo Veloce 800 Lusso. I’ll have a review for you soon, but overall I’m a fan.

My choice of bike meant I had MV Agusta on my mind, which is why I was pleasantly surprised to find that Robb is a huge fan of the brand himself. Robb’s owned over 20 of them, and there’s several in the museum – I figured it’d be fun to share a few of them with you. Hell, there’s even one outside of the museum, and I had never heard of it before. This is a 1965 MV Agusta Trasporto Tevere 235 (hopefully you just learned about it through a recent Guess That Bike post?)

It’s an adorable commercial vehicle with a 10 horsepower MV engine underneath the seat.

I was highly amused by the external kickstarter! You can see where it goes in the above photo. 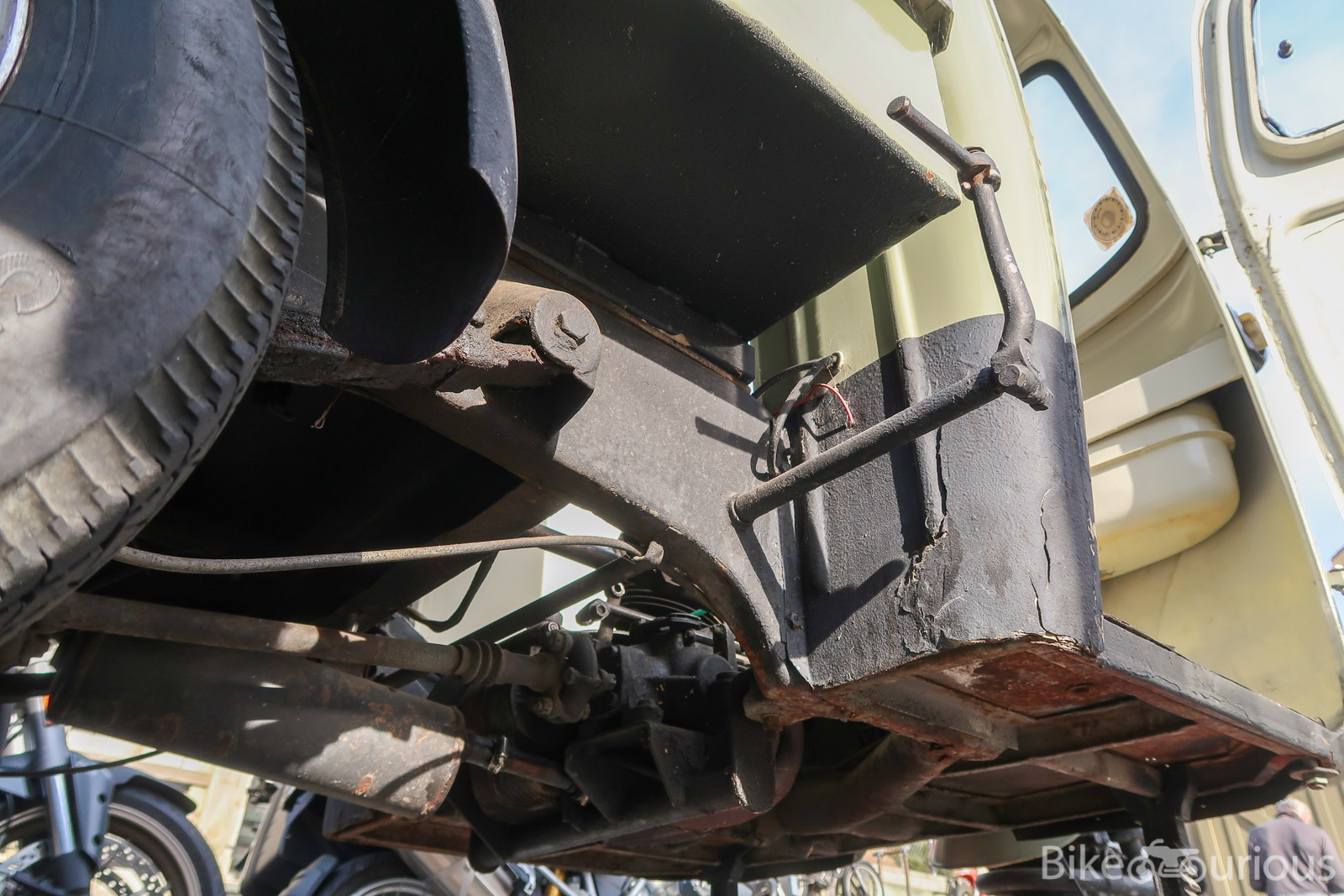 Robb welcomes Charles to the museum.

One of the first things you’ll see after you walk into the front door is a 1972 MV Agusta 750S.

MV’s first attempt at a four-cylinder road bike was surprisingly ugly, but they more than made up for it in 1969 with the introduction of the 750S. The dramatic red/white/blue styling was complemented by a displacement bump to 743cc, resulting in 69 horsepower.

It wasn’t really a sport bike with 555 pounds of weight and a shaft final drive, but the sound of the straight-cut gears and exhaust were thrilling nonetheless. Other components for the 1973 model included Ceriani 35mm forks, Grimeca brakes, and Marzocchi shocks. 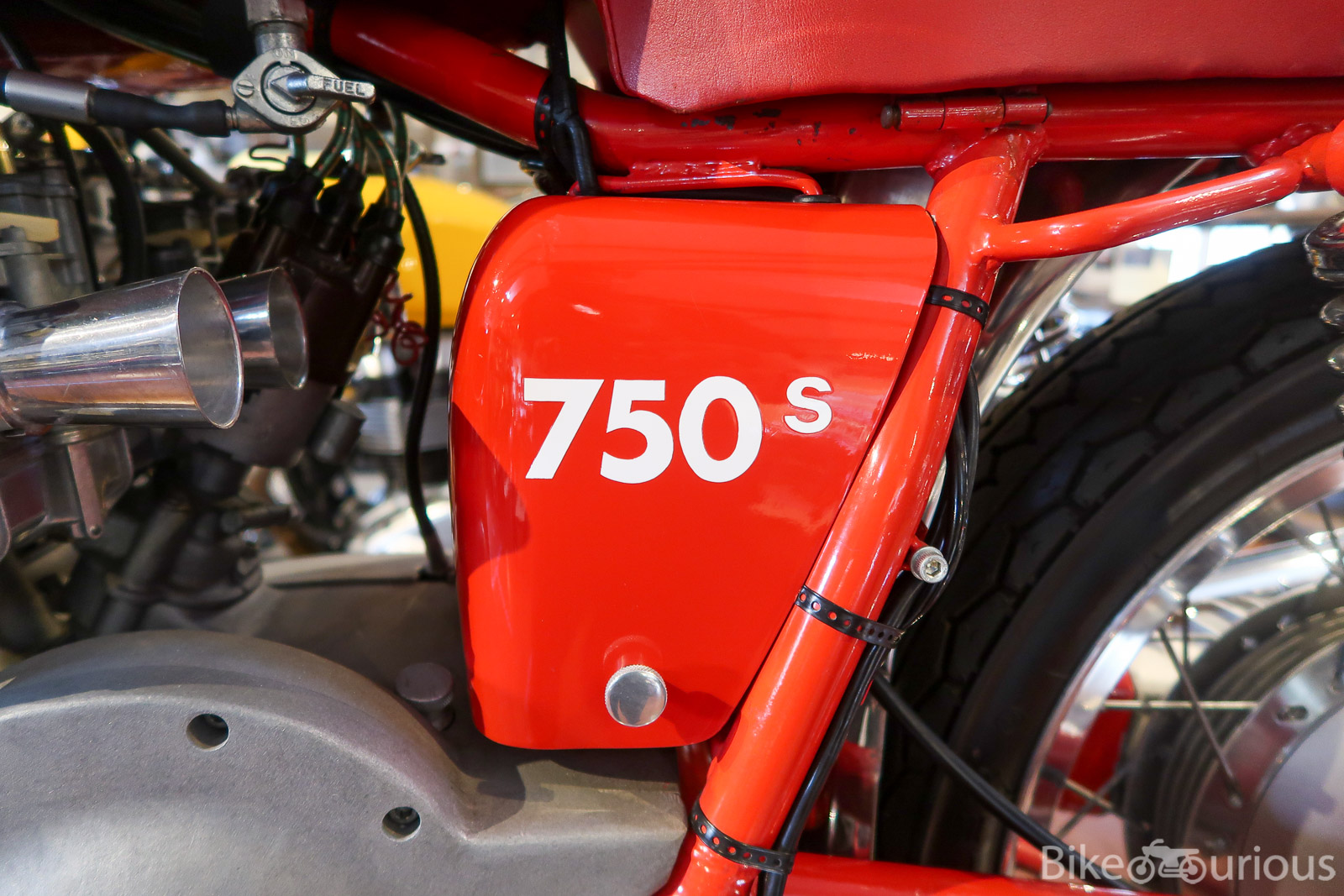 I’ll present the rest of the bikes chronologically:

1954 MV Agusta 175 CST and CSTL – this is a fun pairing because the CST was restored and the CSTL is a survivor. They face each other in the museum and it makes for a great way to compare components. 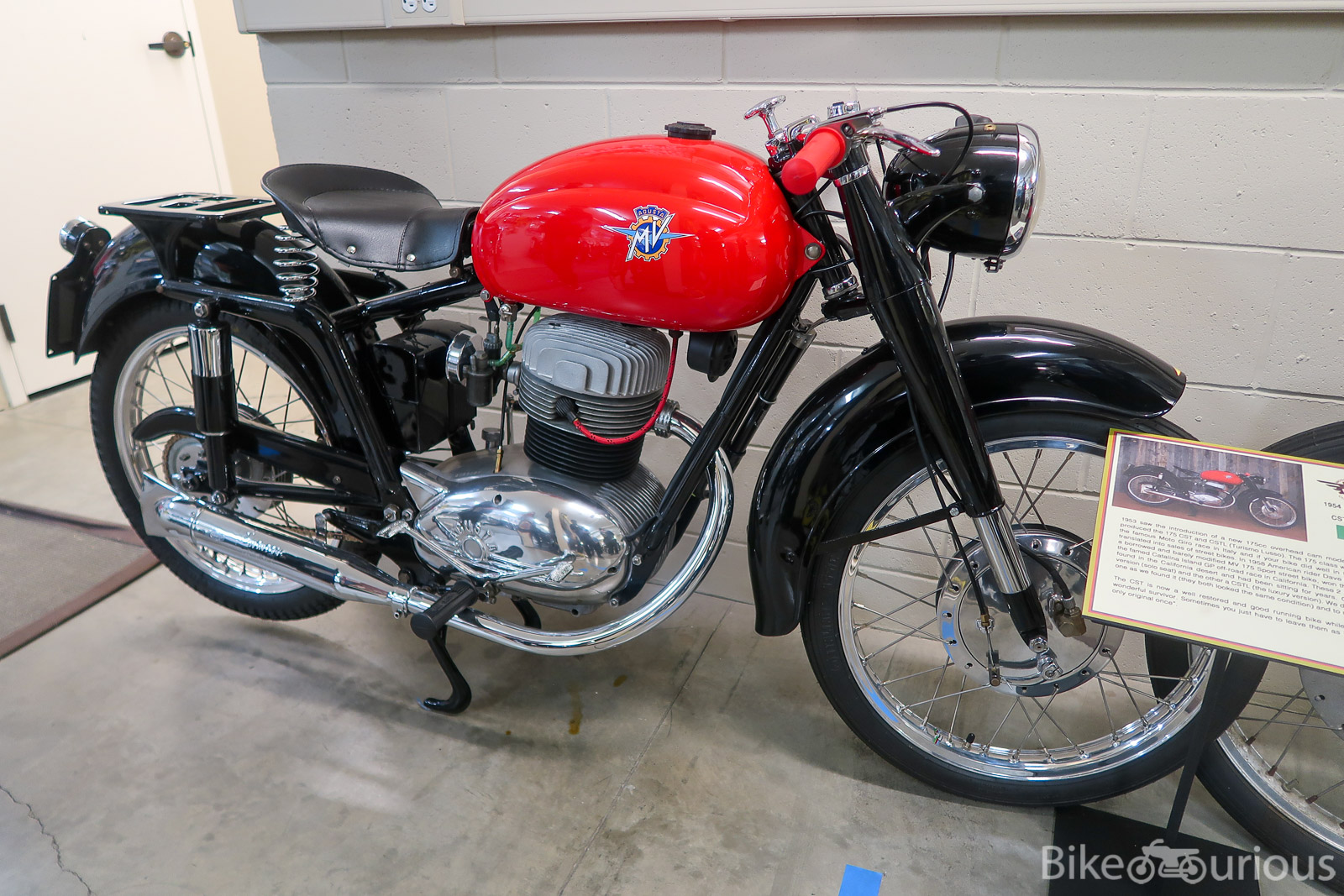 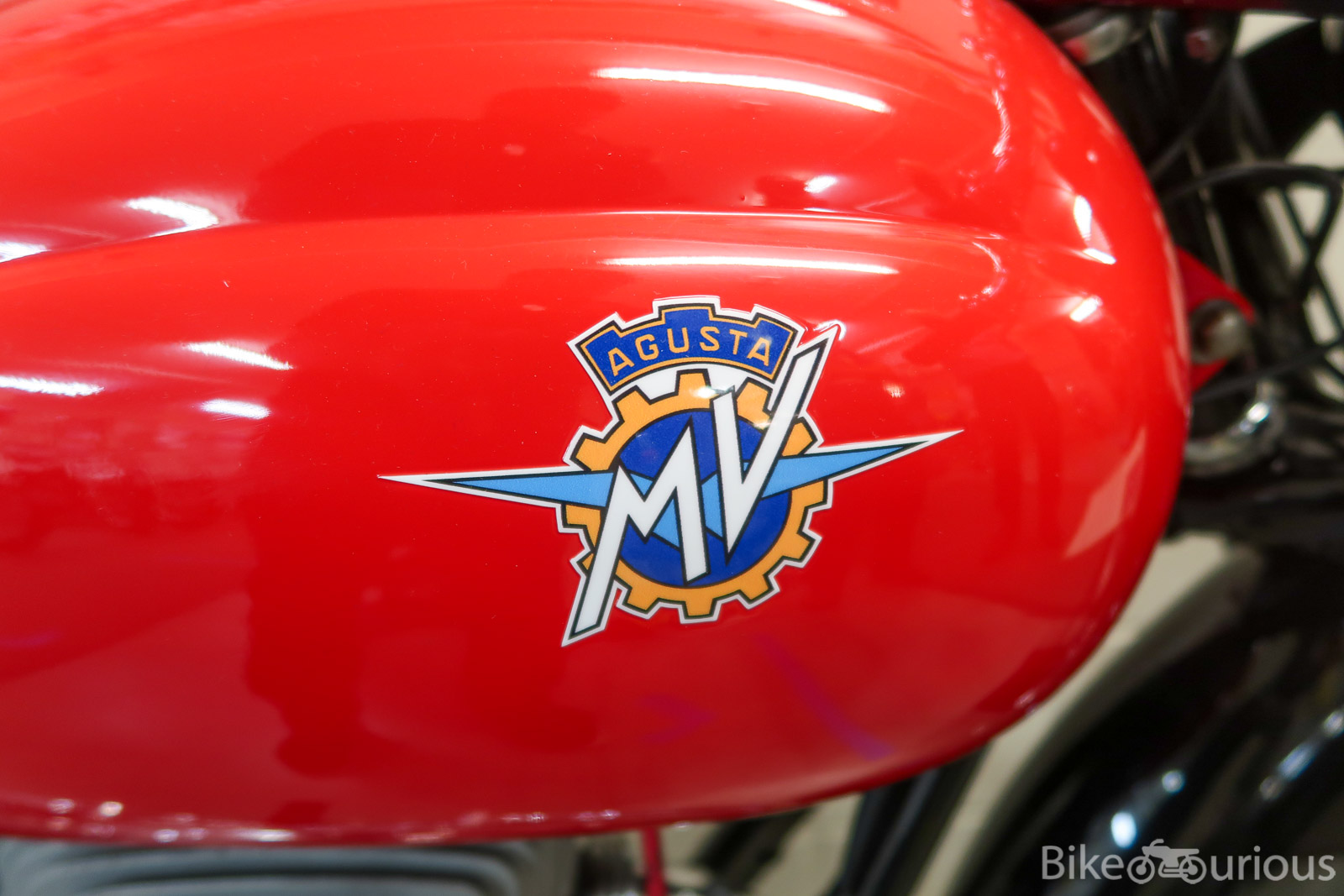 1956 MV Agusta Disco Volante 175 – one of my favorite names in motorcycling, “Disco Volante” is Italian for “flying saucer.”

The name was bestowed upon this model because of the shape of the tank. 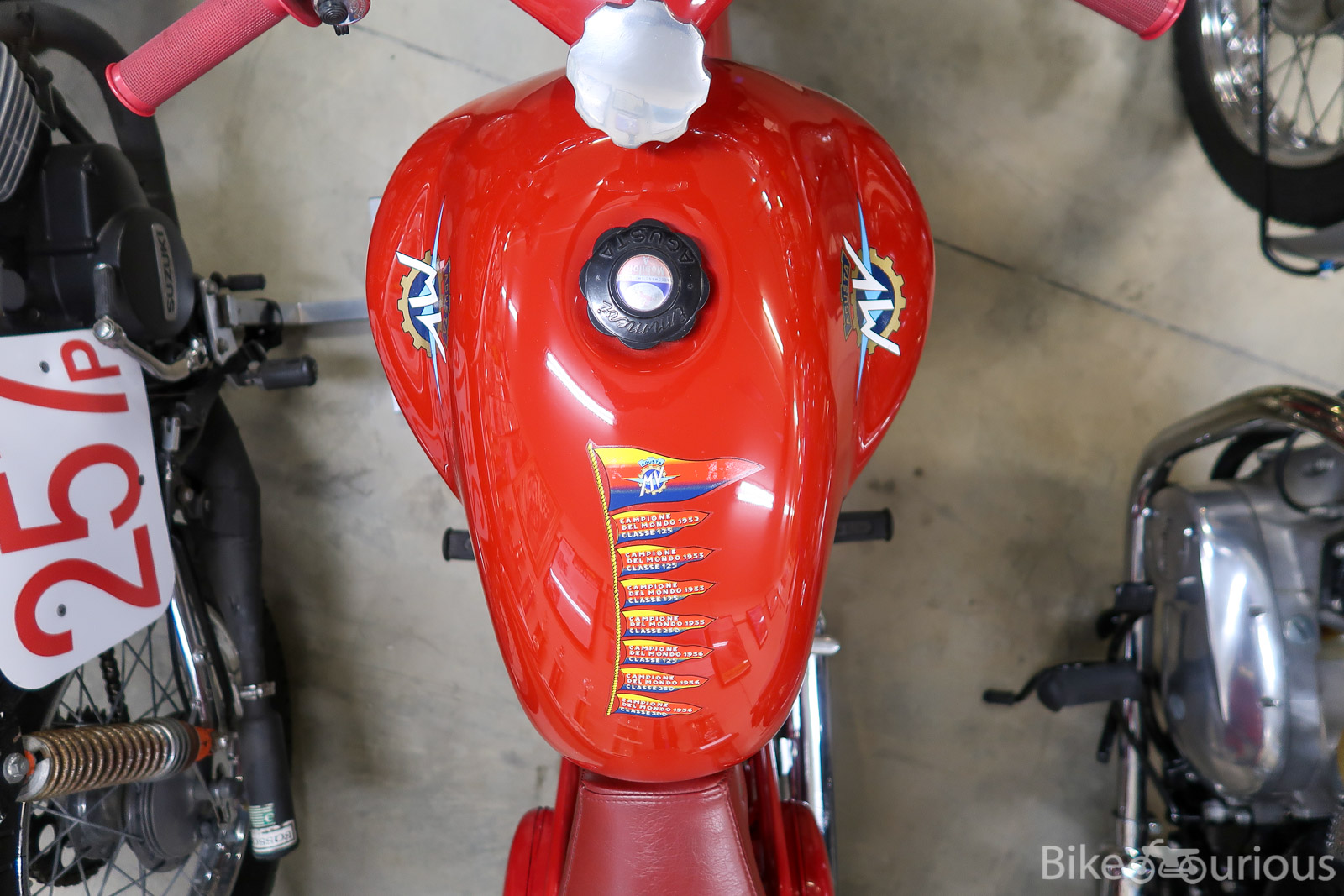 It was basically a sport version of the 175cc CS, and it became MV’s best selling bike. It was available with telescopic or leading link forks. Disco Volante is also the name of a series of fantastic Alfa Romeos.

1956 MV Agusta Squalo 175 – Squalo means “Shark”, and this bike earned that name by ditching the bulbous bodywork of the CS and utilizing an upgraded 175cc engine with a bigger carb and higher compression ratio. 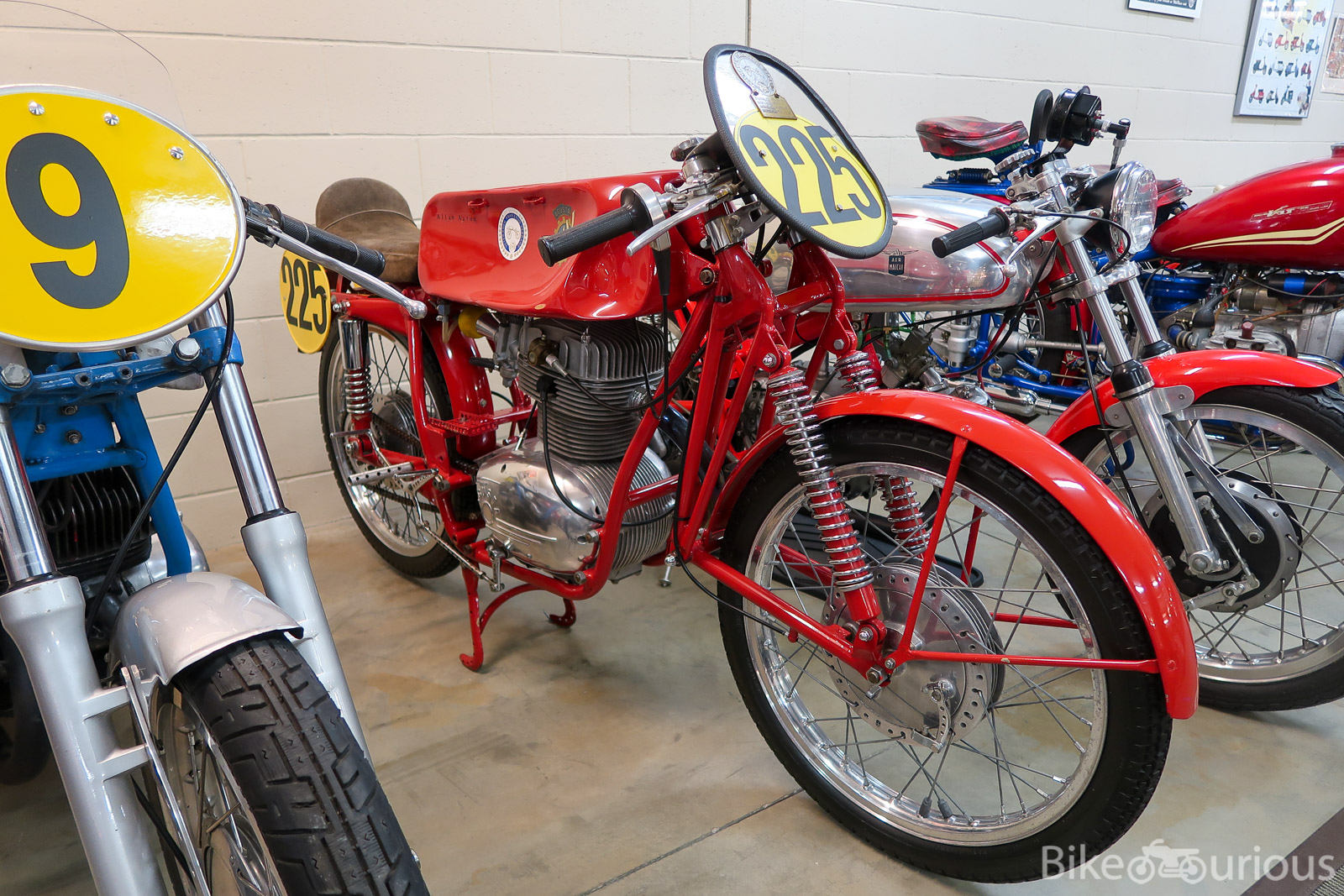 The lightweight frame helped the bike save 30 pounds over the CS.

The transmission even gained a gear in the process as well (up to 5), and top speed was nearly 95 miles per hour. This specific bike was restored in 1980 and the owner enjoyed it at tracks all over Europe including the Isle of Man and the Nurburgring. It even spent a couple of years on display at the Nurburgring’s museum. 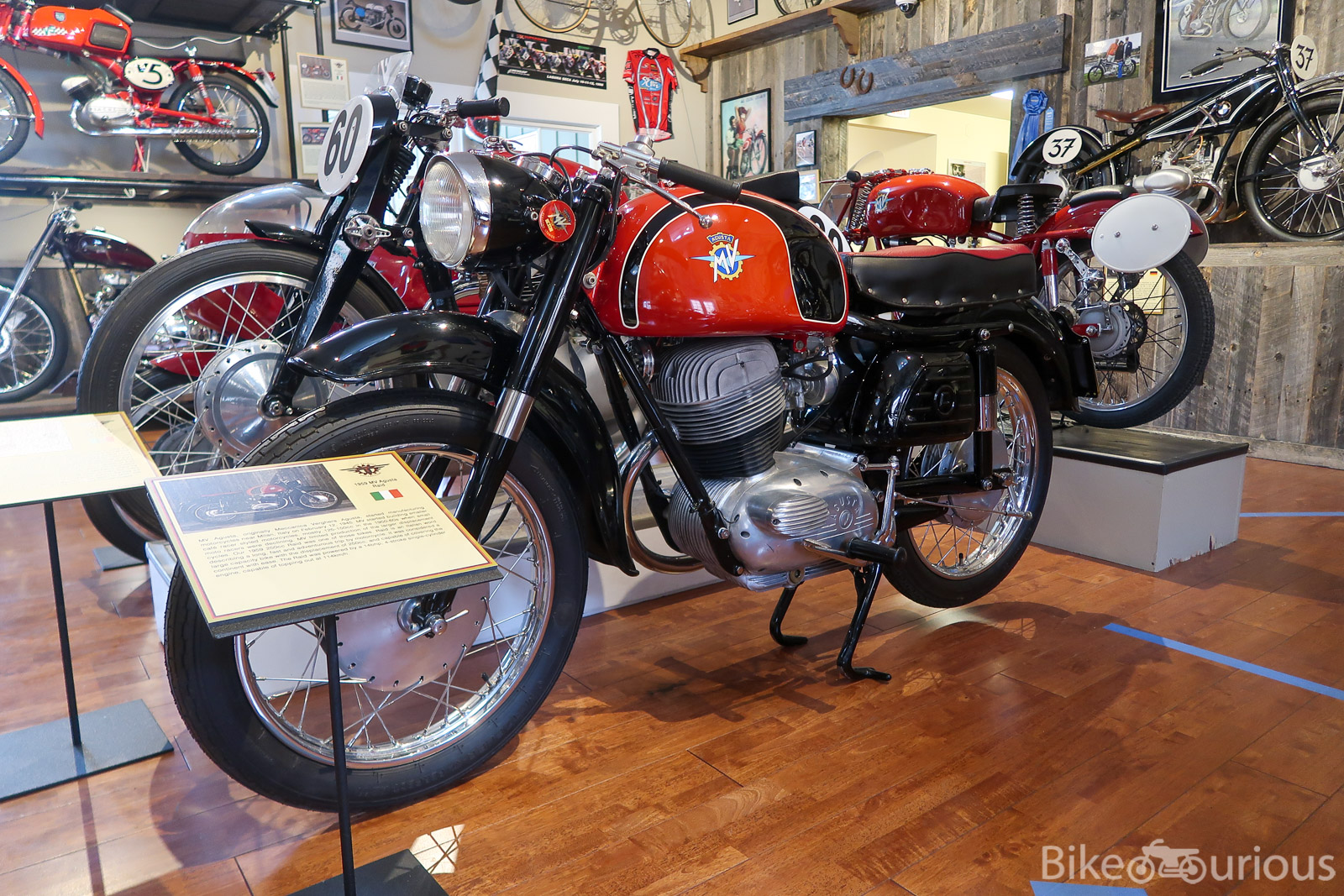 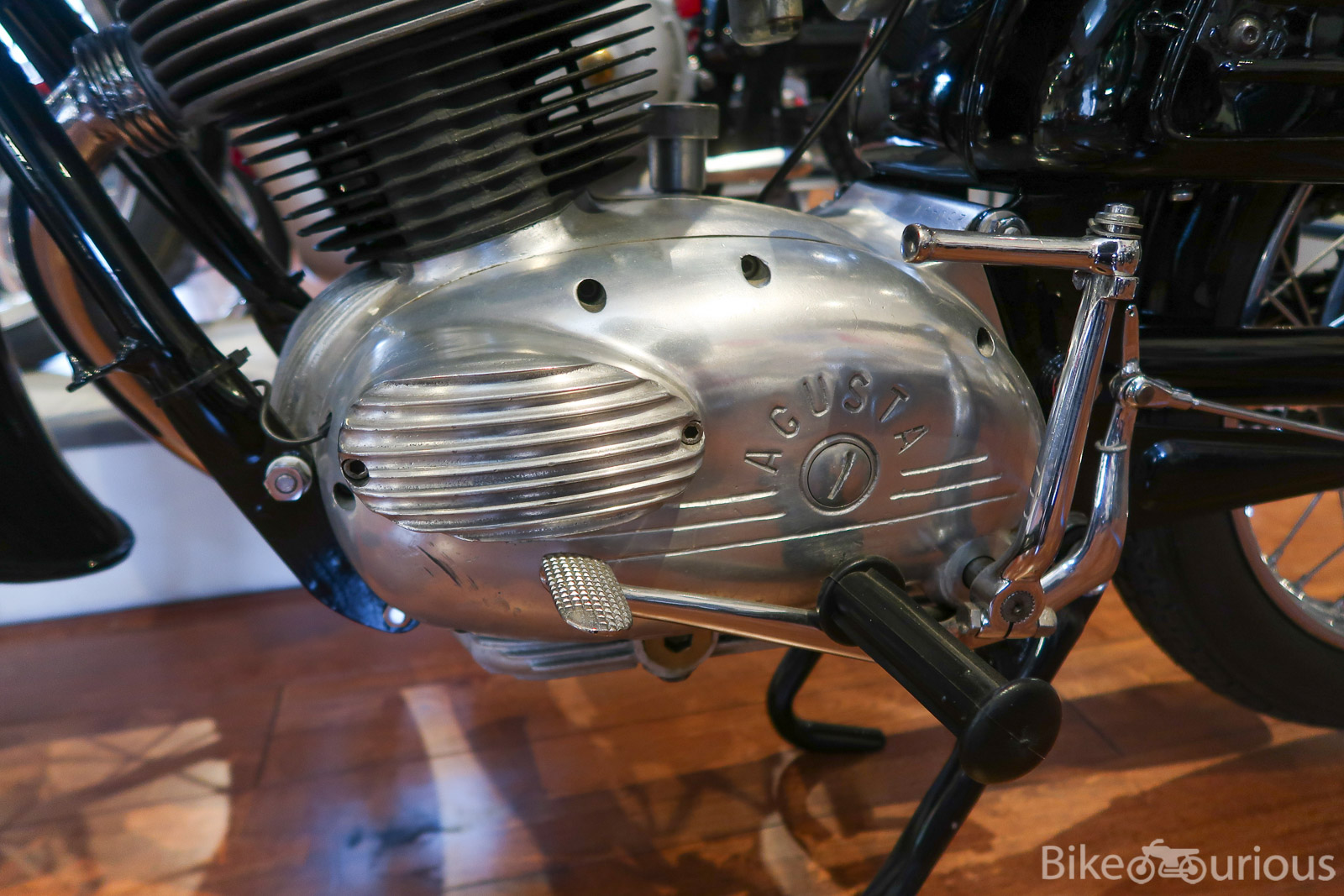 Per the information plaque, “Raid is an Italian word describing a long, fast, and adventurous trip by motorcycle.”

1964 MV Agusta Gran Turismo Lusso – in name, it’s the predecessor for my ride today (Grand Touring Luxury). It was the successor to the Centomila and was capable of 70 miles per hour. 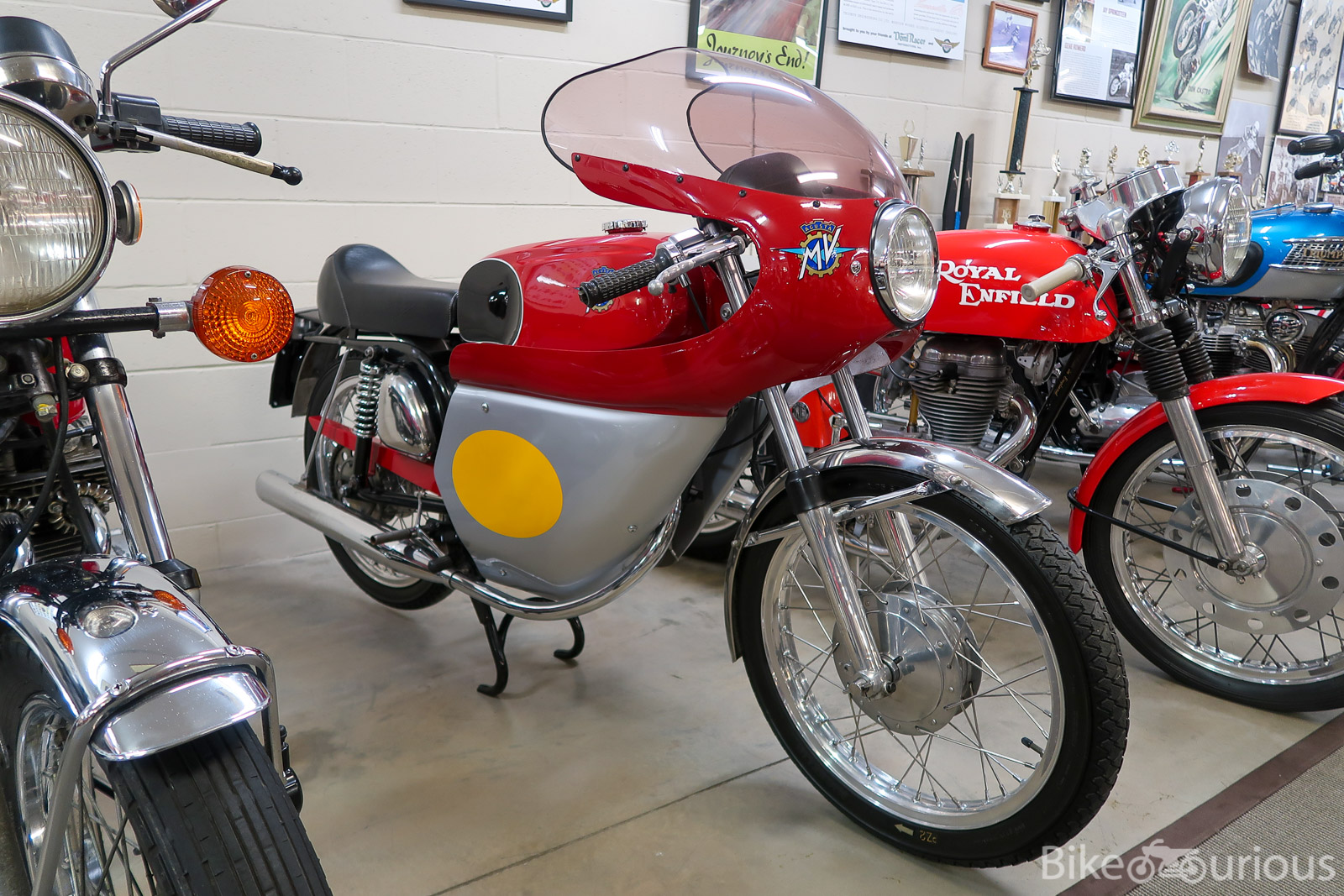 It was designed for younger customers, but the styling, colors, and large fairing aped MV’s GP racers.

1973 MV Agusta Mini Replicas – by the far the slowest MVs in the building, but also some of the most fascinating. Phil Read had MV build a tiny replica of his 500cc GP racer for his son, and it got enough love that they made three official versions – one with 8″ wheels, one with 10″ wheels, and one with 12″ wheels. All three shared a 47cc Morini motor, though the transmissions differed.

1974 MV Agusta 350 – predecessor of the Ipotesi, the 350B Sport was a mid-sizer that Classic Bike called “half the size of a MV four but twice the fun.” This example was first sold in Switzerland, and the original owner beefed it up with a big bore to ~400cc, larger carbs, and an exhaust that looks like a Magni unit. The handmade aluminum bodywork was an optional factory extra.

1975 MV Agusta 350S – designed by legendary automotive stylist Giorgio Giugiaro, it was nicknamed the Ipotesi (Hypothesis in Italian). It was quite advanced for the time – triple disc brakes, cast magnesium wheels, and a 10,000 rpm redline made this a treat to ride.

The 350cc engine was an air-cooled, two-cylinder unit fed by dual Dell’Orto carburetors. Produced only between 1975 and 1977, the Ipotesi was an instant hit after being revealed at the Milan Motorcycle show.

Some came with a rare sport fairing, though this example doesn’t have it. It does have a gorgeous Magni exhaust, though. 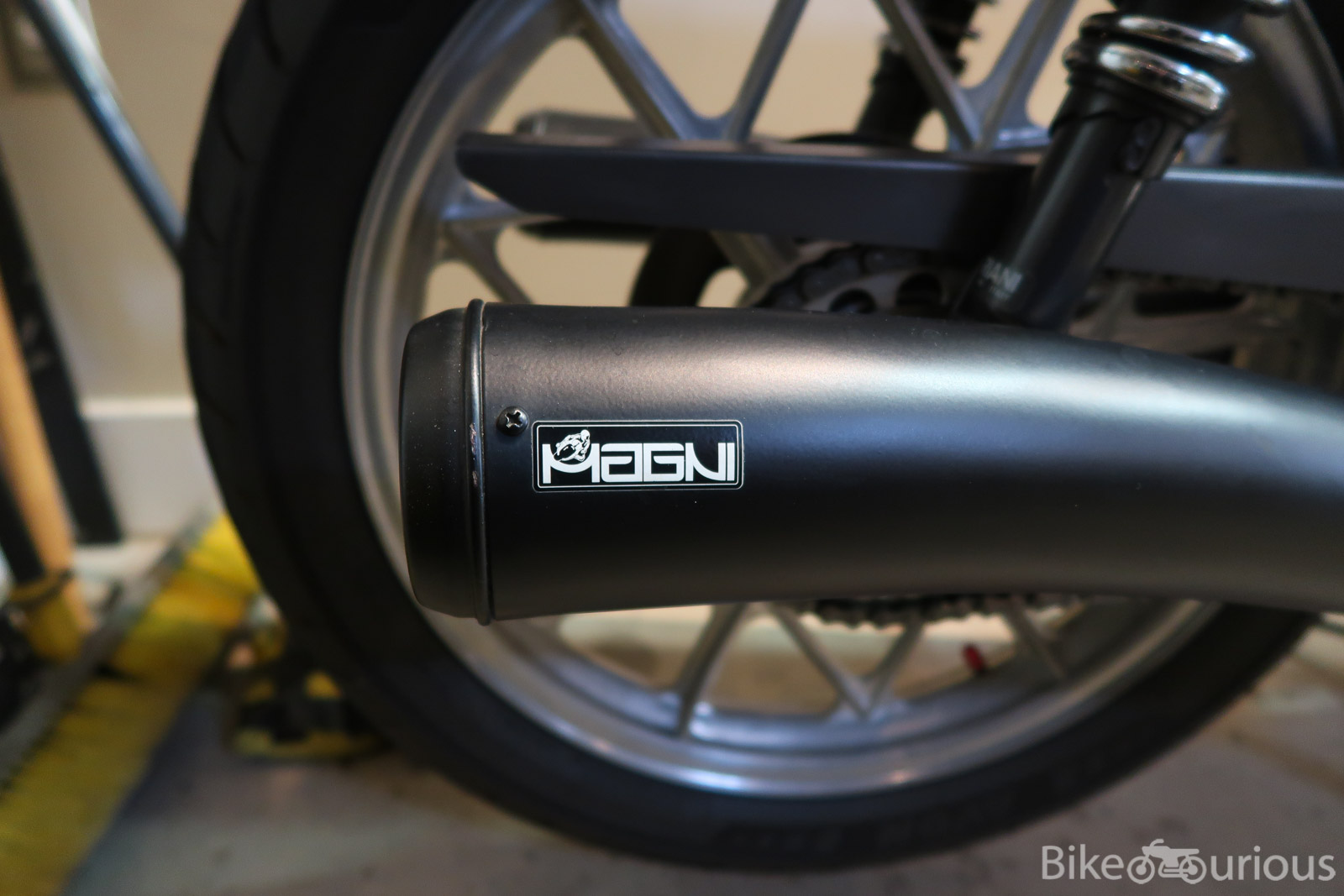 Claimed production numbers vary between 27, 35, and 42, but what’s undisputed is that it’s the last of the original MV’s as production ended in the late 70s and the last bike in their warehouses was sold in 1980. 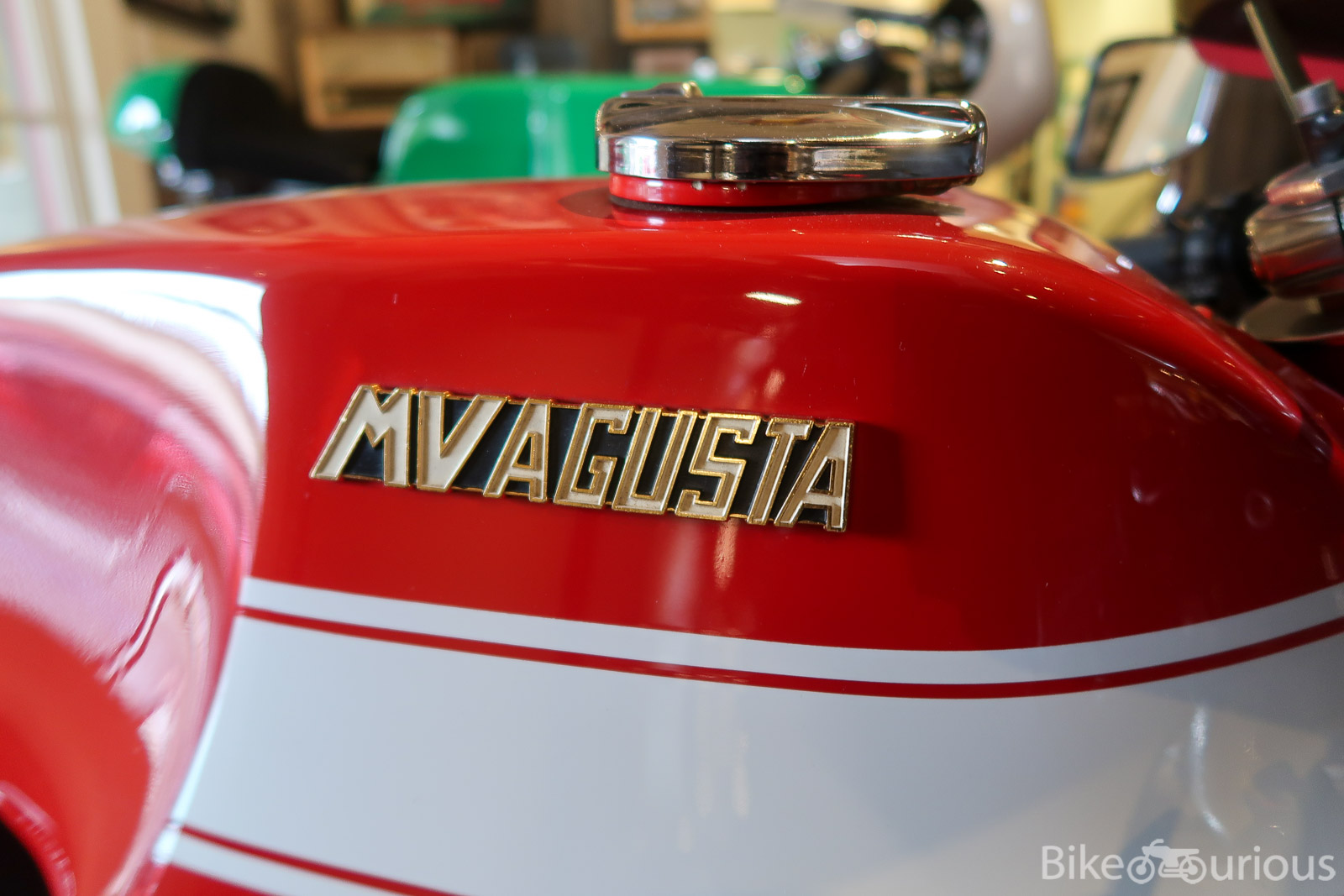 Continuing a theme in this story, this MV also has lovely Magni pipes.

This is the 2008 bike, which is signed by workers from the plant in Varese.

Thus concludes our mini tour. I asked Robb if I could get a photo of him on the Turismo Veloce before I left. He’s just picked up a 2002 F4 Senna 750 (#172 of 300), though I suspect his first ride with it of 500 miles would have been a bit more comfortable on the TV! 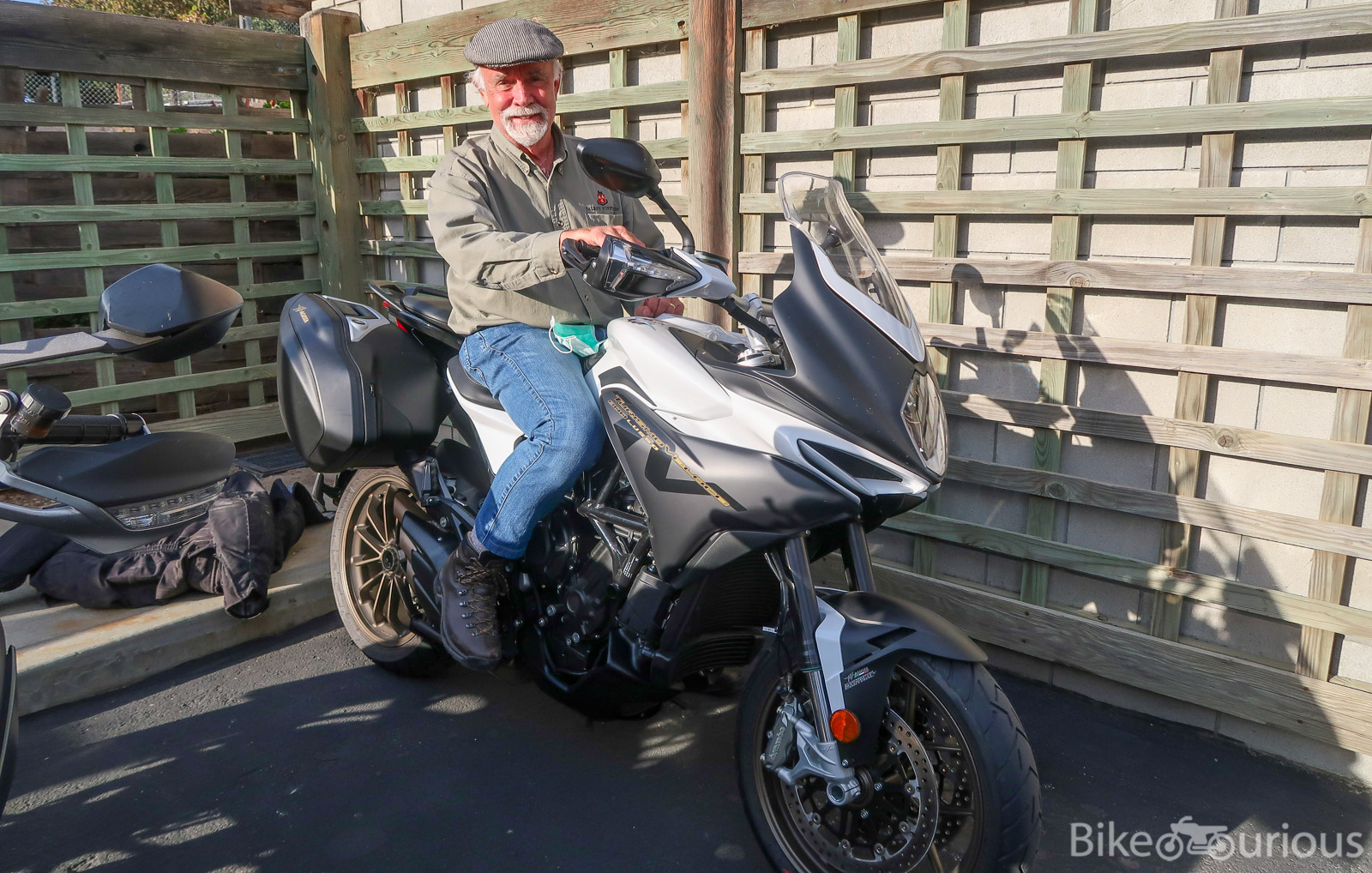 There’s obviously plenty more than MVs here, so I implore you to bookmark Robb’s page and keep checking to see when it’s allowed to open up again. I’ve had the pleasure of meeting some incredible people through motorcycles, and Robb’s one of the best. I hope you get the chance to meet him yourself!