COVID’s making travel difficult right now, so let’s go back a couple of years to when Abhi was on a road trip in the Iberian Peninsula. Here’s some photos from a visit to Museu de la Moto in Andorra – a truly Iconic Collection.

I had high expectations seeing as a rainbow was leading me basically to the front door!

In general, this unexpected gem of a museum chronologically displays bikes going back to the 1900s through 2000 or so. 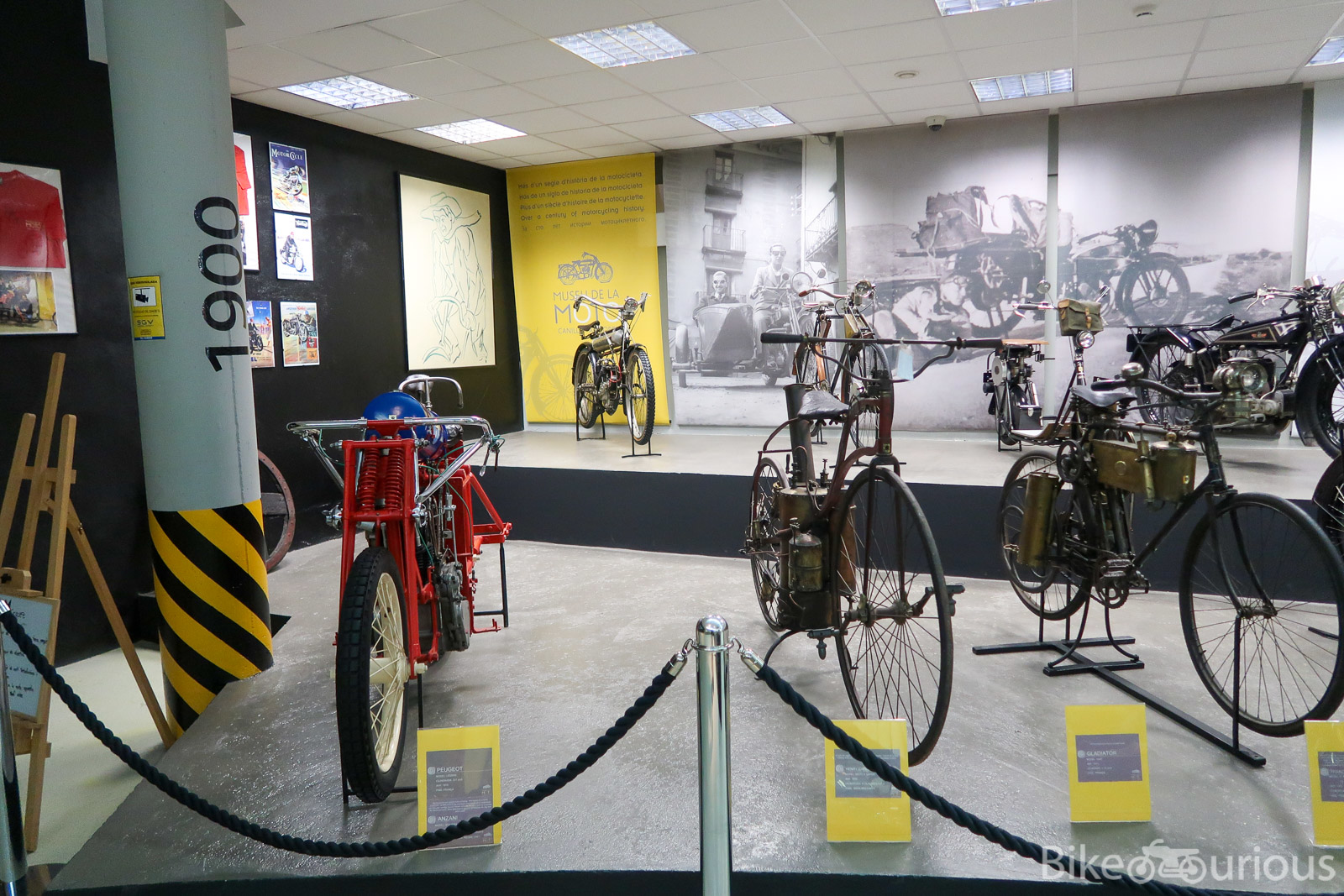 Here are some highlights from my visit. Let’s start with a 1909 Anzani. This was built by Alessandro Ambrogio Anzani as a pace bike for bicycle racers in velodromes and it features a 4-stroke V-Twin.

Anzani was quite an interesting man who developed a very successful engine manufacturing company, among other things. I’d highly recommend that you check out CAMmag to learn more about him and his crazy creations. 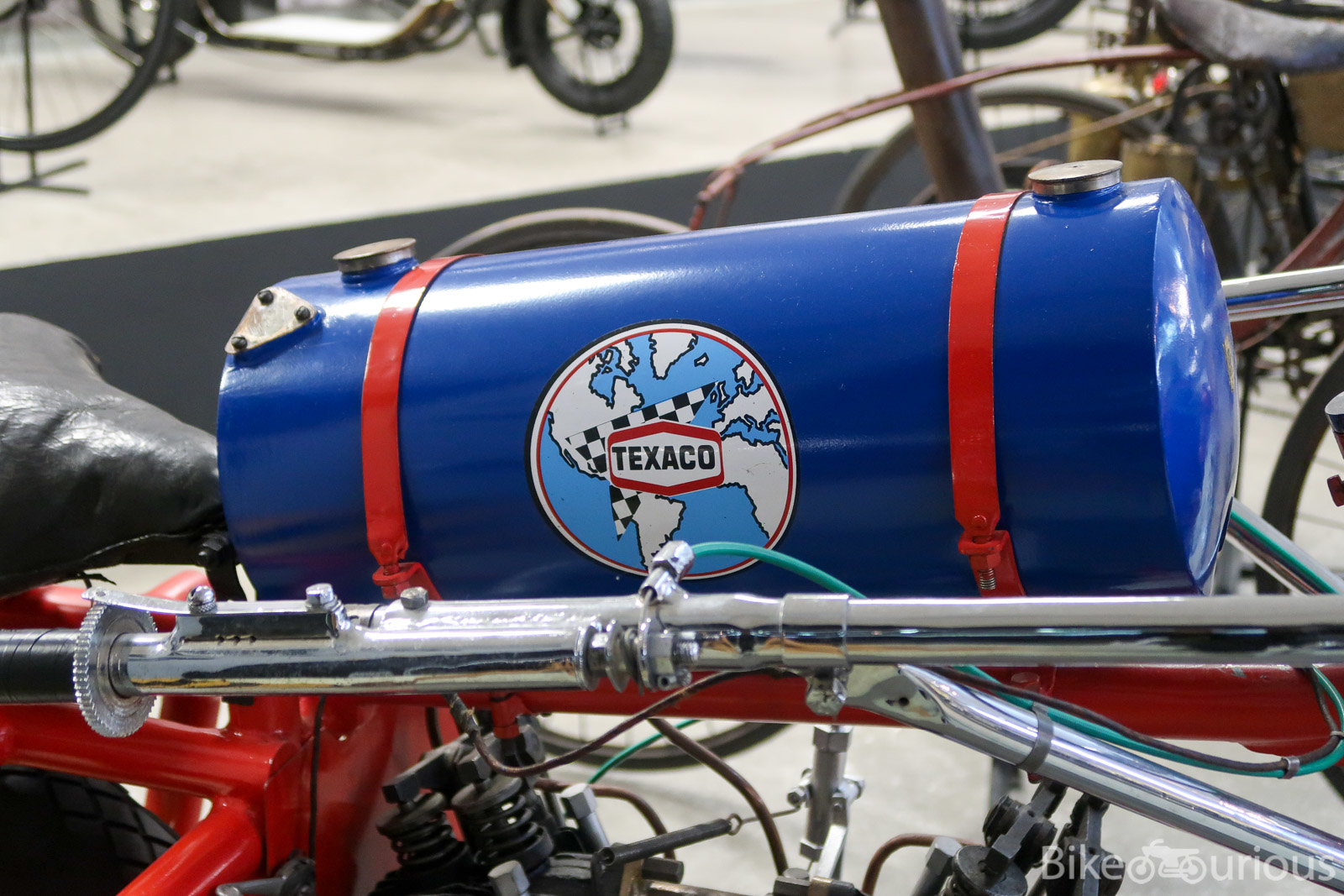 A steam-powered bicycle from 1896 designed by Henry Capel Lofft Holden, a Colonel in the British Royal Artillery. Holden would go on to design the Brooklands race track and become the Director of BSA.

Designed by Carl Neracher in 1918, the Ner-A-Car was sold as a cheap automobile alternative. Approximately 10,000 were built and sold in the US, and another 6,500 were built and sold in England under license. The step-through design and bodywork kept riders clean, allowing them to wear ordinary clothes on their way to work or local shops. Varying sources online suggest that of the 16,500 Ner-a-Car’s ever built, only about 100 remain. For more on the model, check out this site dedicated to the Ner-a-Car. 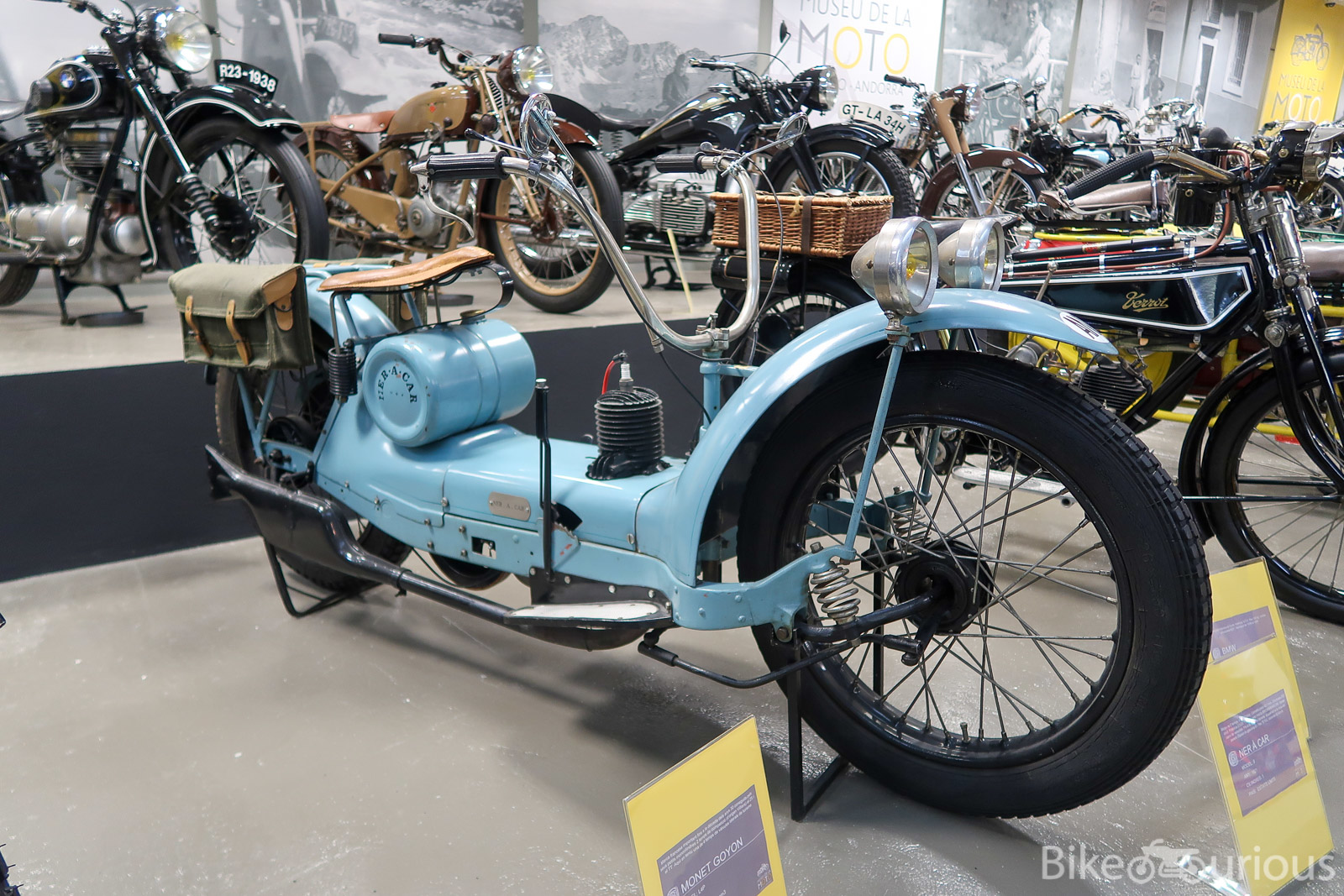 Hopefully you recognize this Bohmerland from a recent Guess That Bike.

The 4-seater version has a rear seat long enough for two people!

Something I had never seen before was the Derny, a French company that pioneered motorized bicycles for cycle pacing – now all similar machines are called derny, no matter who makes them. In 1939, Derny started selling street models – here’s a 1949 Cyclotandem, which uses a 98cc Zurcher 2-stroke engine.

All Dernys of the time (whether for track or street) shared the design cue of a fuel tank underneath the handlebars.

The aptly-named 1930 Majestic. A shining example of Art-Deco styling, this French bike was designed as transportation that was to resemble a two-wheeled car rather than a motorcycle. The most distinctive aspect about this motorcycle, in my humble opinion, is not the styling but the steering, which is taken care of with a central rotating hub and zero rake! A manual hand-shifter let you work the three-speed gearbox, and Majestic offered a variety of engines, including 350/500cc Chaise units, JAP 350/500cc options, a 500cc Train engine, and a liter engine from Cleveland. Want to learn more? Check out this article from the always-wonderful Vintagent, who shares his thoughts after a ride of his own.

Bryan Fuller of Fuller Moto recently created a modern tribute called the Majestic 2029, though the new bike approaches the front steering with a more Bimota-esque take. 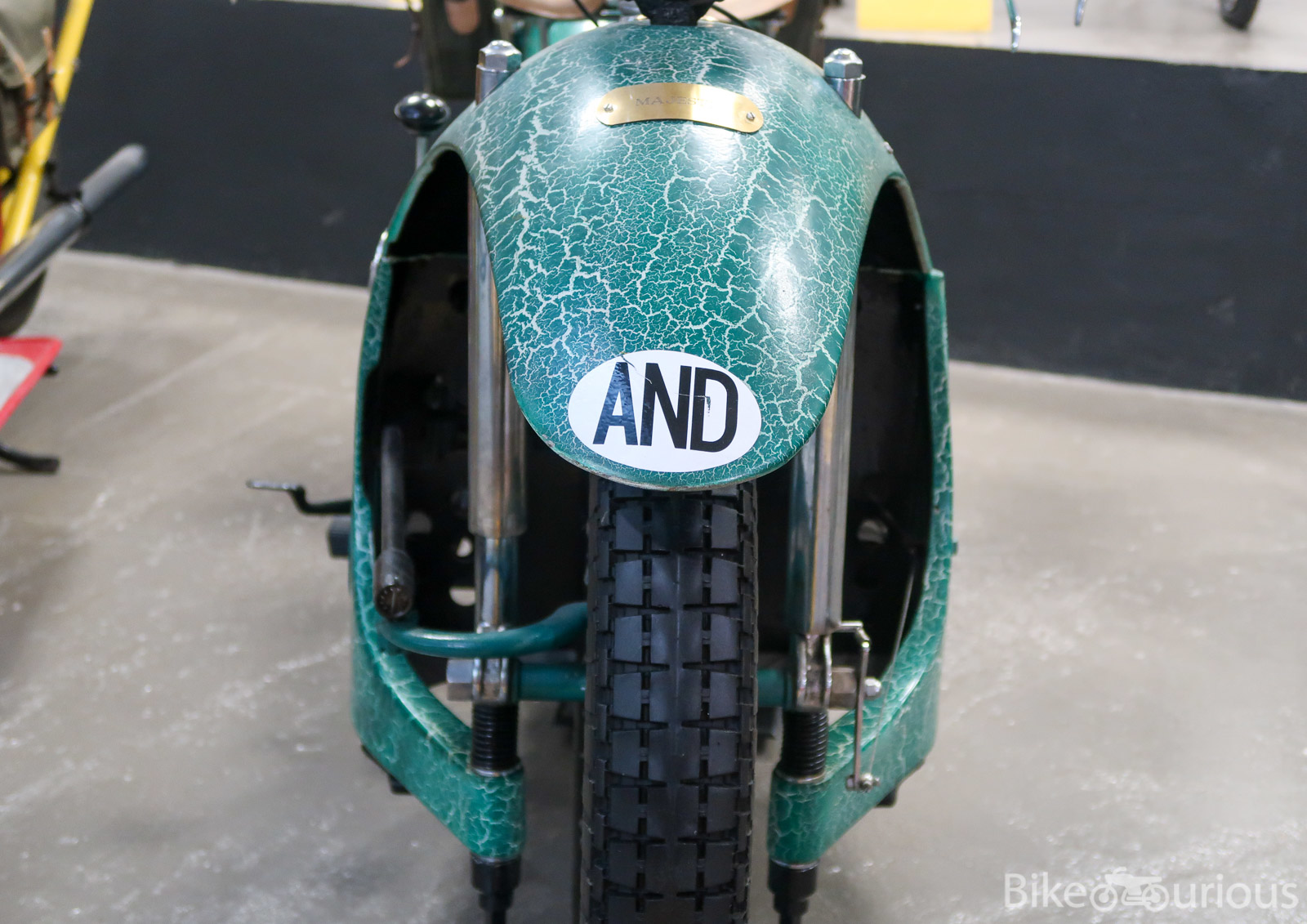 The informal Trials section caught my eye, starting with one of the prettiest trials bikes I’ve ever seen.

The museum just says it’s a 1957 Motobecane Trials Replica with a 200cc engine. 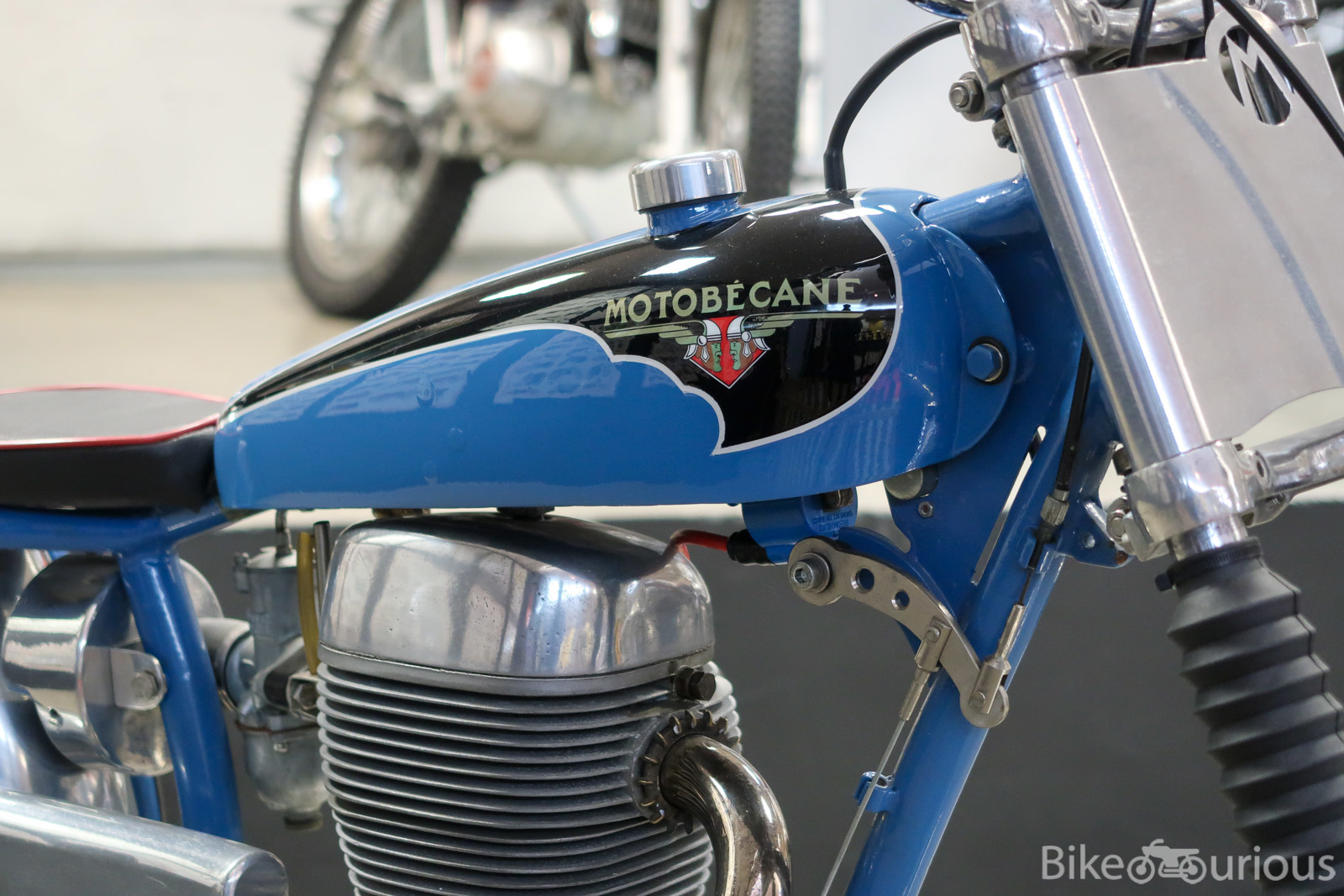 Here’s a little more info on the model – the link suggests that a Stuart Brown of BPS Engineering in France was building modern replicas.

There were also some 80s trials bikes from local-ish manufacturers like Beta, Fantic, and Merlin – plus a couple bonus bikes from Honda.

Other interesting off-roaders include this Puch Borrasca and a Moto Guzzi that I couldn’t identify – the plaque next to the bike called it a “Llagosti.”

The ultimate off-roader at this museum might just be this Honda MTX ski bike. The MT was sold in Europe and South Africa in 50cc, 80cc, 125cc, and 200cc versions, all of which were two-strokes. I believe this is a MTX200, though the museum plaque did not have information on the engine or why this had been converted.

OK, that might not be true – the real kings of the dirt in this building are a series of Paris-Dakar-winning KTM rally racers piloted by Cyril Després – a couple of 660s and 690s as well as a 450 for good measure.

1981 Montesa Crono 75. The Crono was Montesa’s last road bike and it was offered in 75cc, 125cc, and 350cc displacements. The Crono was created in response to Bultaco’s introduction of the Streaker, and it even led to the creation of a racing series called La Copa Crono (Crono Cup). 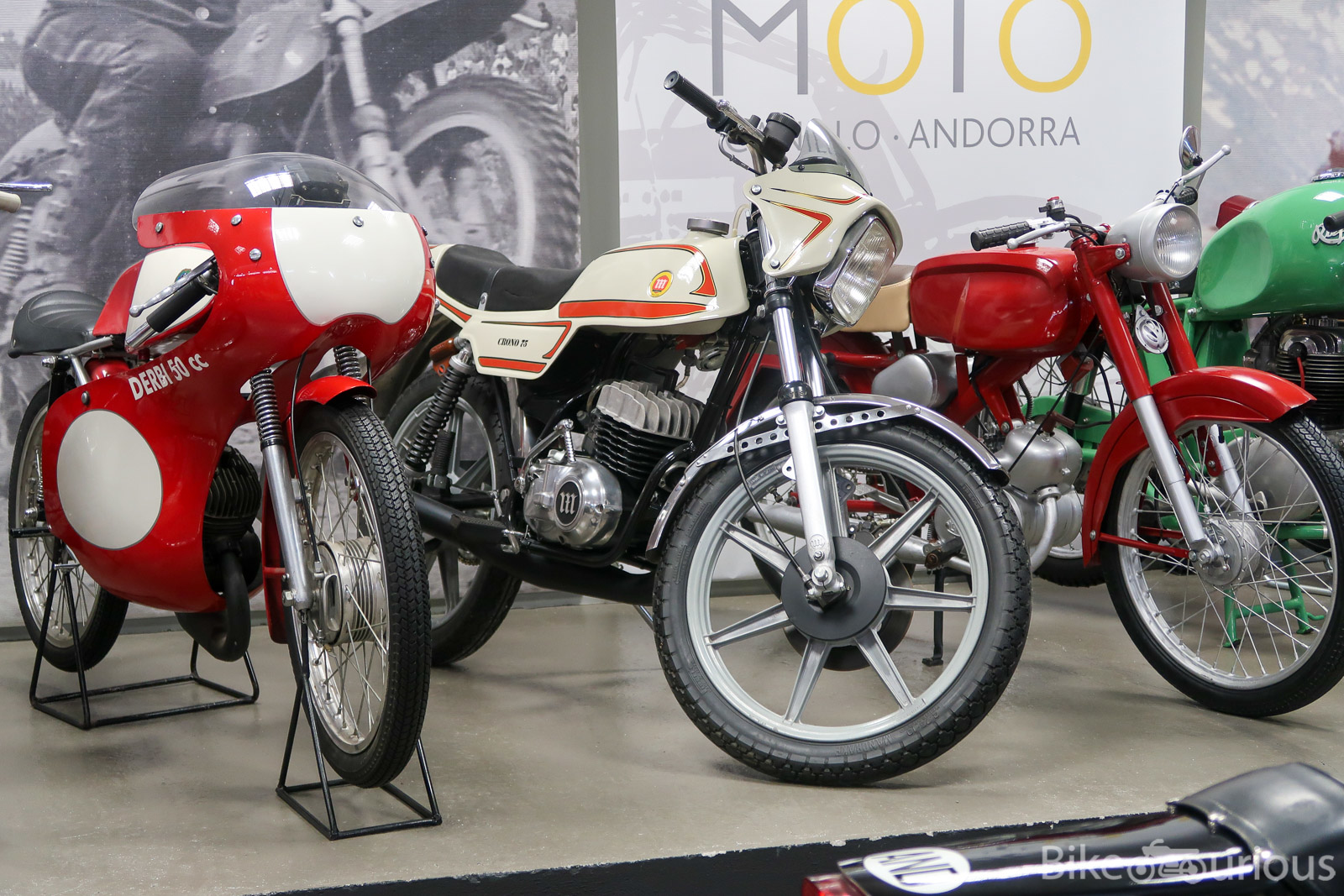 On the left we’ve got a 1969 Solo, one of the first modern electric two-wheelers. It was designed to fold-up for pilots who wanted easy transportation once they arrived at a destination in their light aircraft. On the light we’ve got a Guai Bailen, one of the few motorcycles to be built in Andorra itself. It’s a 1977 model, but the sign says nothing else beyond the fact that it’s obviously a sidecar. 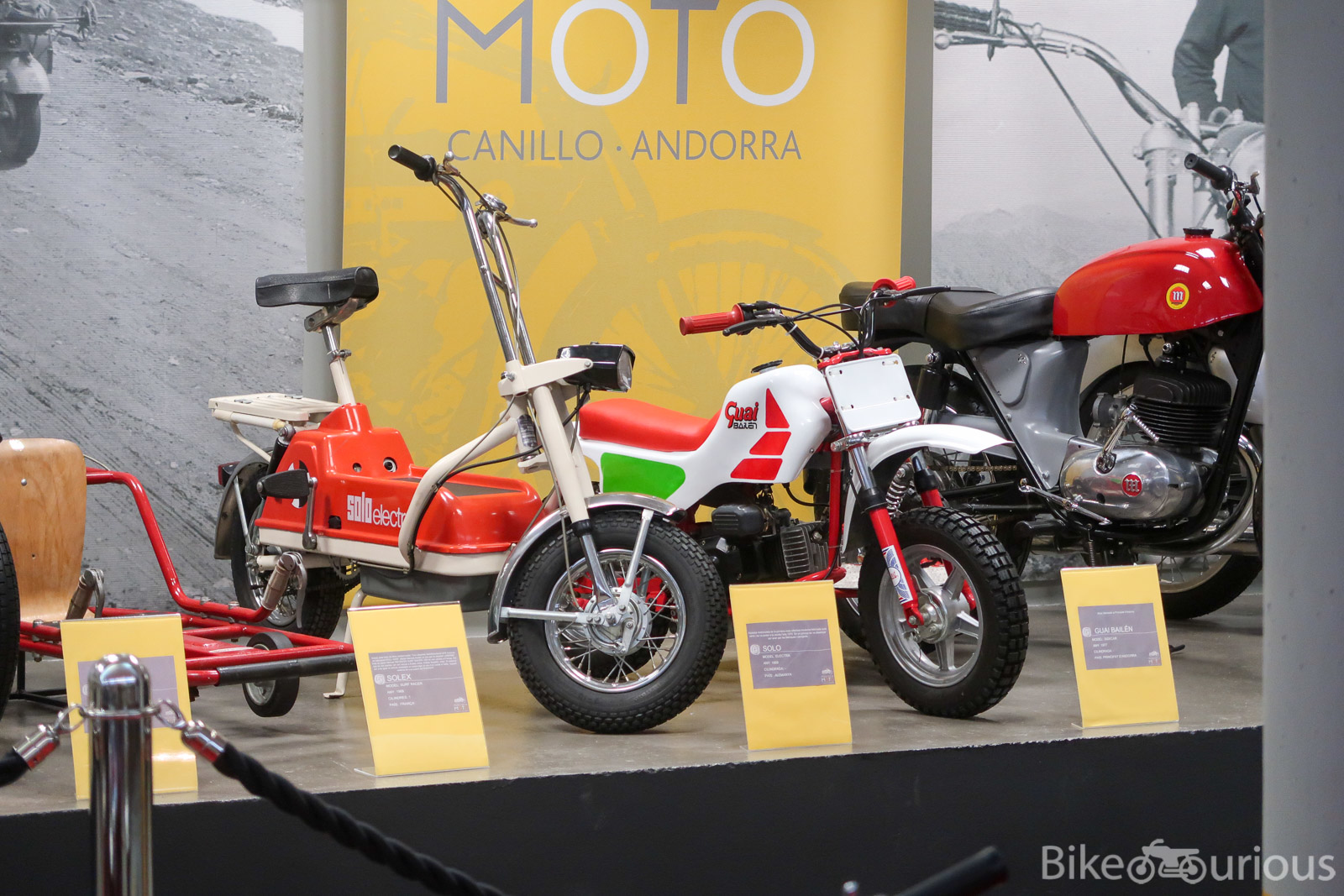 Another personal favorite was the OSSA Yankee 500 SS. After John Taylor’s American company Yankee went out of business in the 70s (do you know the story of the Yankee Z500?), OSSA was stuck with a newly-designed engine that no longer had a home. So OSSA built a roadster with Brembo brakes and plenty of orange/yellow touches. 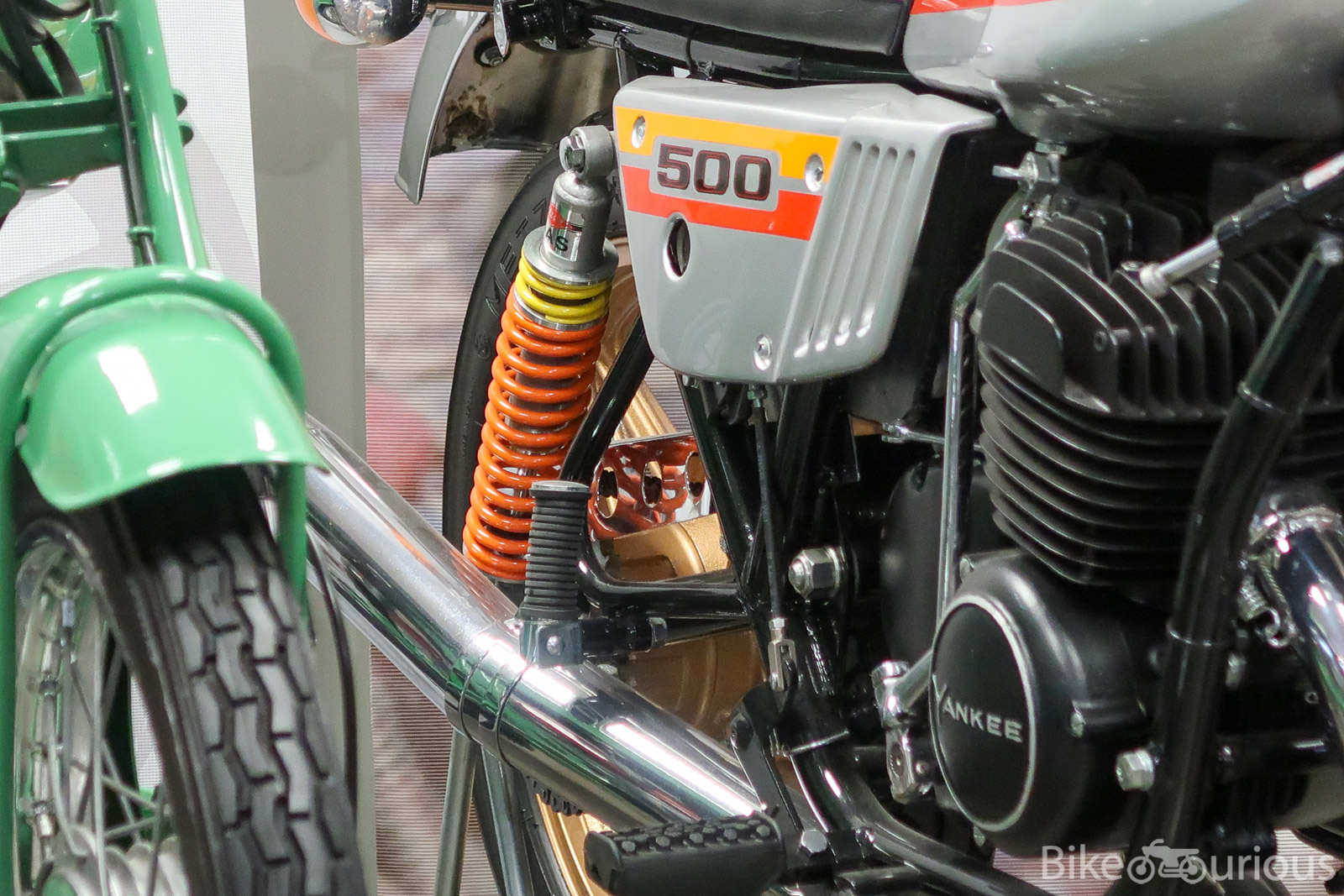 I dug this custom BMW R90 but I couldn’t find any additional information about it. 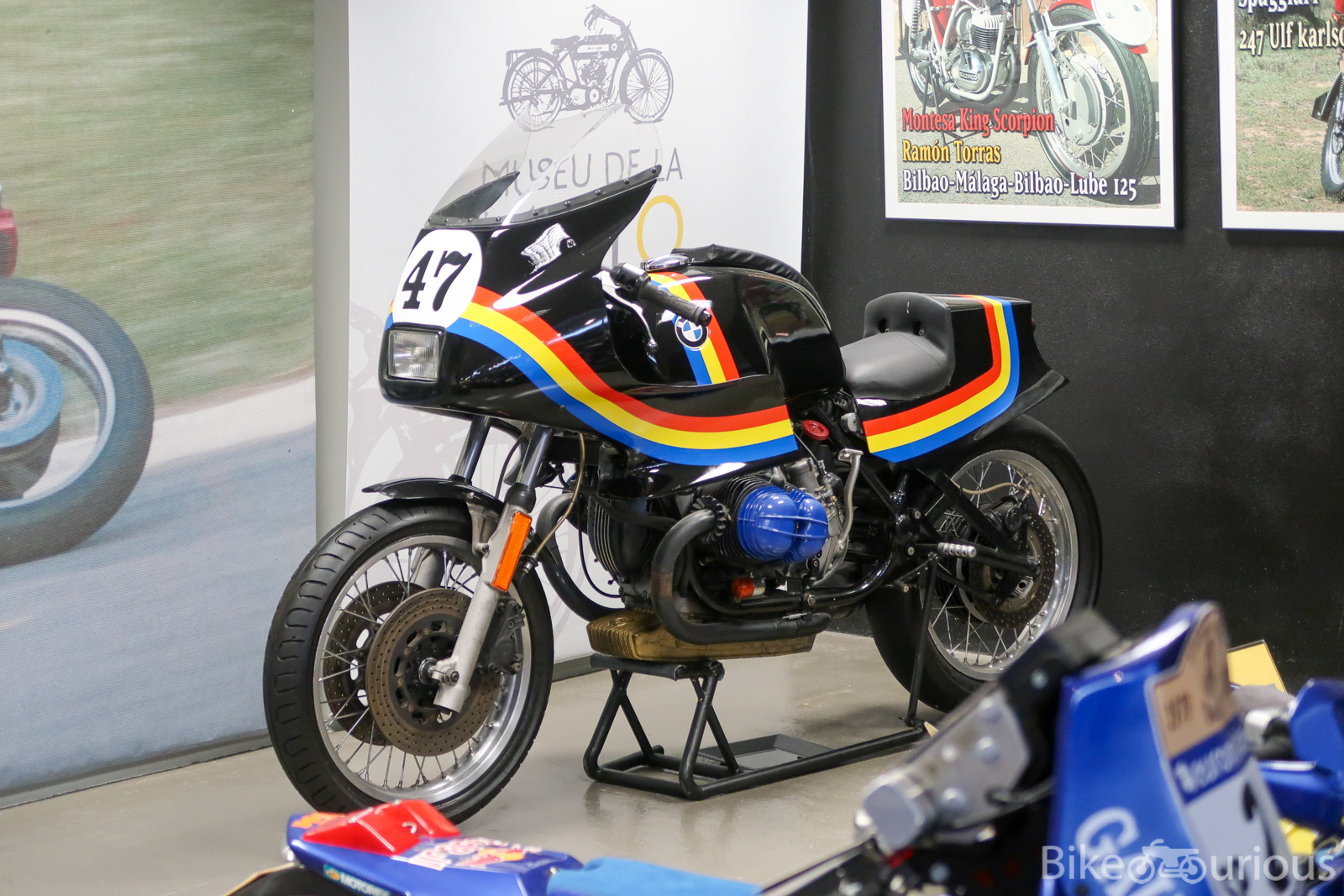 A hometown hero, the Sanglas company was founded in Barcelona three years after the Spanish Civil War concluded. It was founded by the Sanglas brothers with some financial assistance from their father. Their most popular model was the 400: 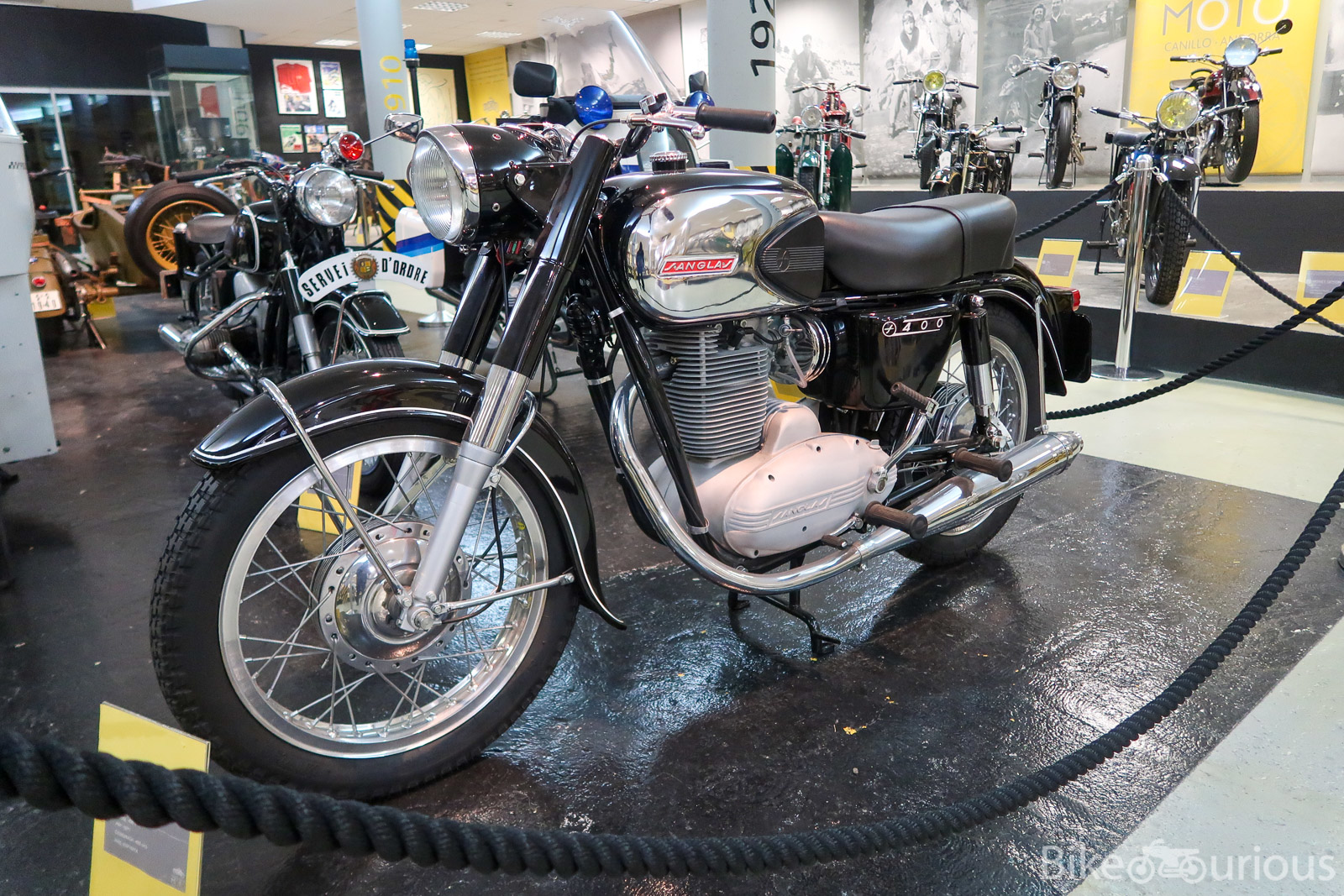 There was also a small section of police bikes, the most interesting of which to me was the Velocette LE. This was a commercial flop with regards to the public, but it did have some success with British police officers – leading to the nickname of “Noddy bike”.

There’s a lot of extra weight for the 200cc engine to work with.

The thermos is a great touch, too. 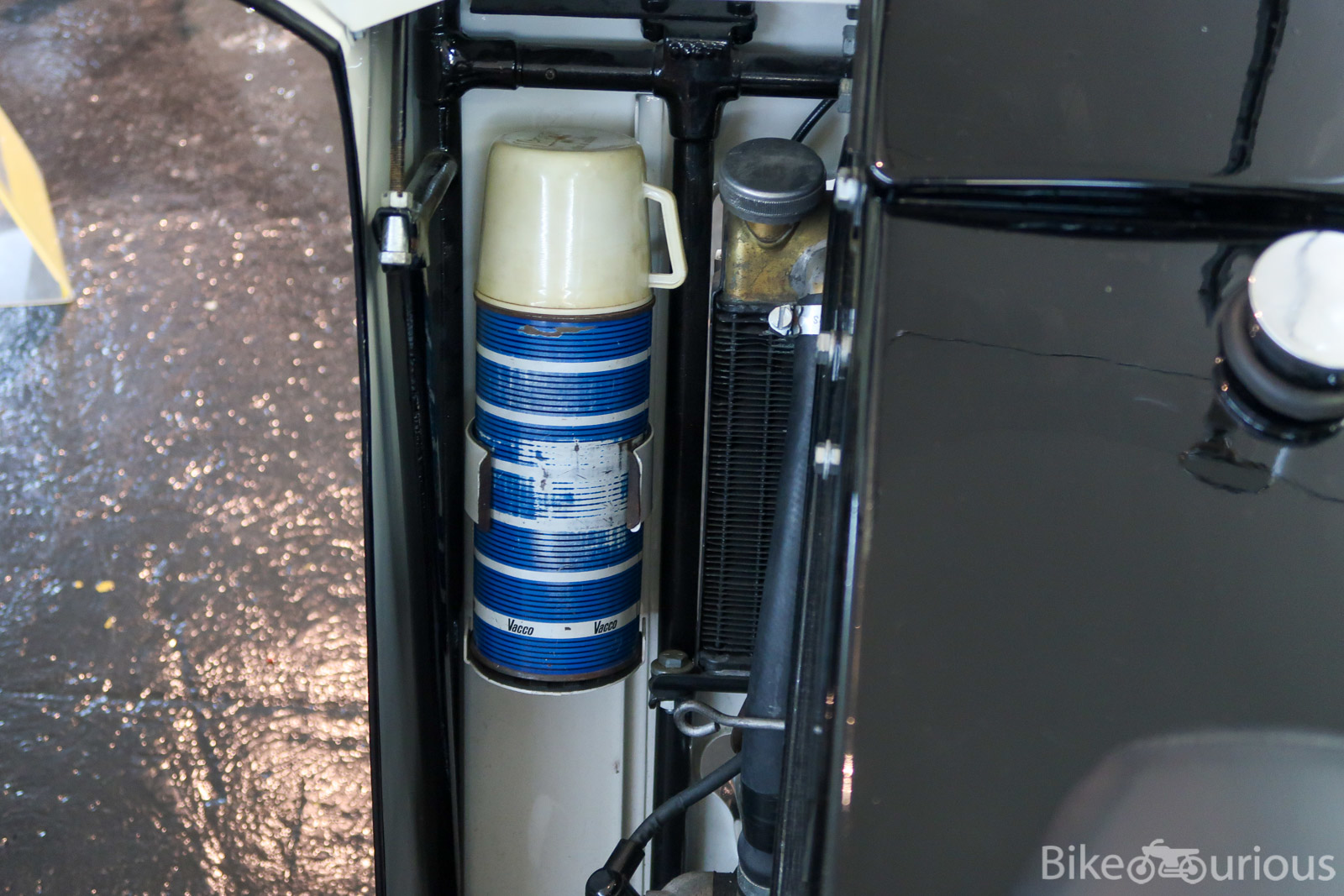 This R80 was a former Andorra police bike. I liked the tall blue light.

I also liked the folding lights built into the front fairing.

Let’s wrap things up with this JJ Cobas 250. JJ Cobas was the brainchild of Antonio Cobas and Jacinto Moriana – the former was credited with developing the modern aluminum frame that would go on to dominate road bikes for years – per Retro Trials “it is generally accepted that Yamaha used the 80s designed Cobas 250cc race bikes as a starting point when they first designed the Deltabox frame.” 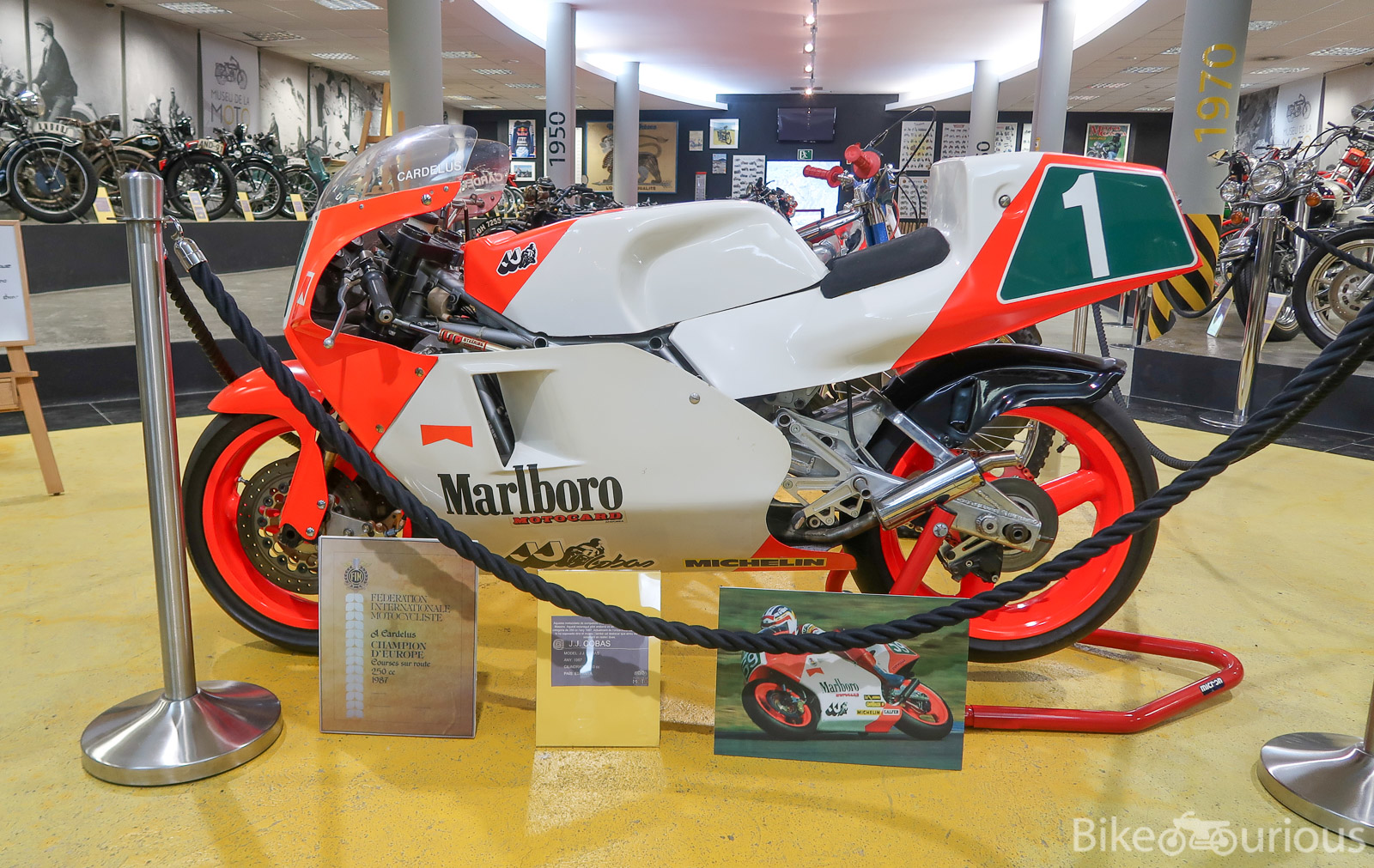 This bike won a European 250cc championship in 1987

The most famous Cobas-designed motorcycle was the racer that Àlex Crivillé won the 125cc world championship with. 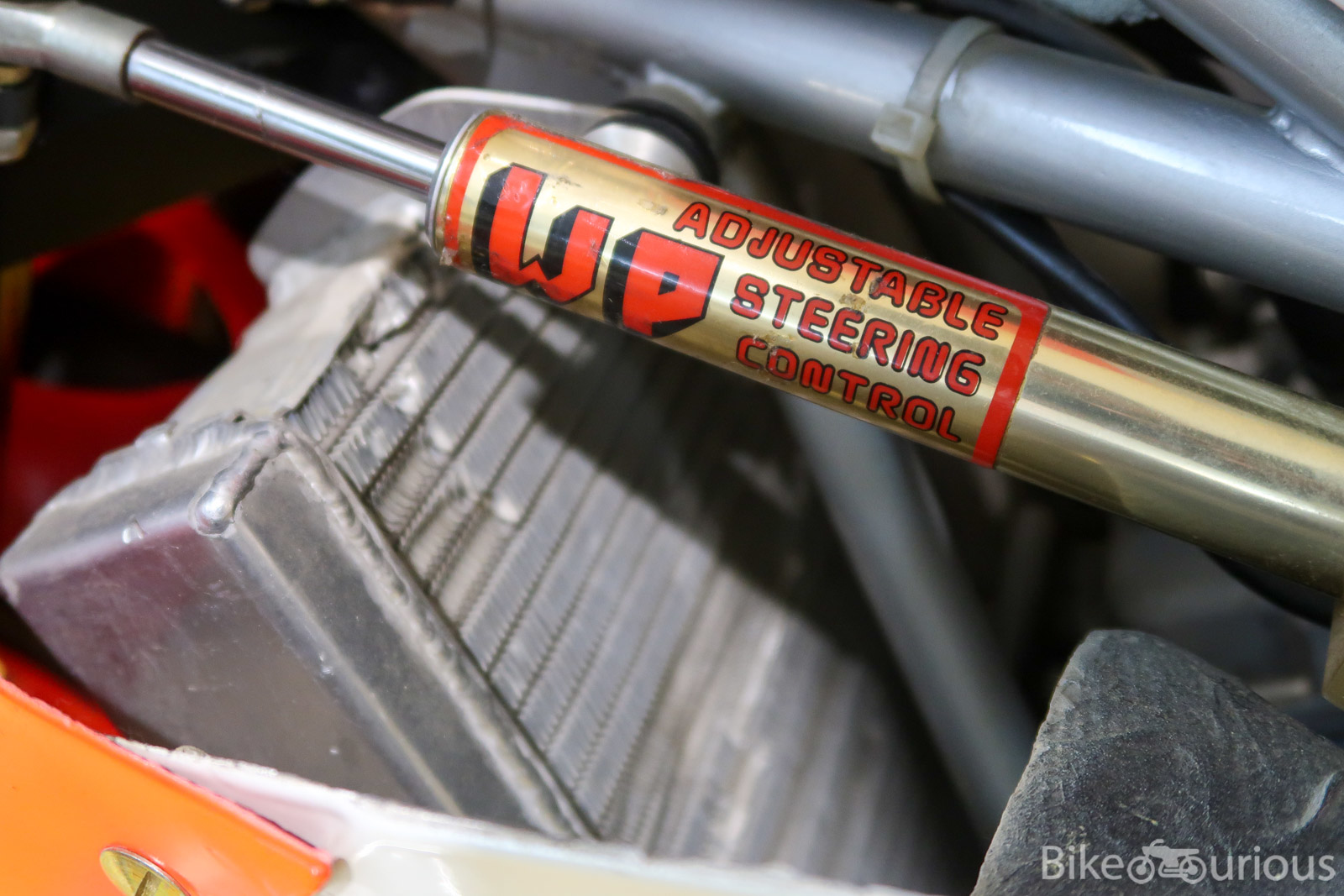 Ah, that’s where my tools went. 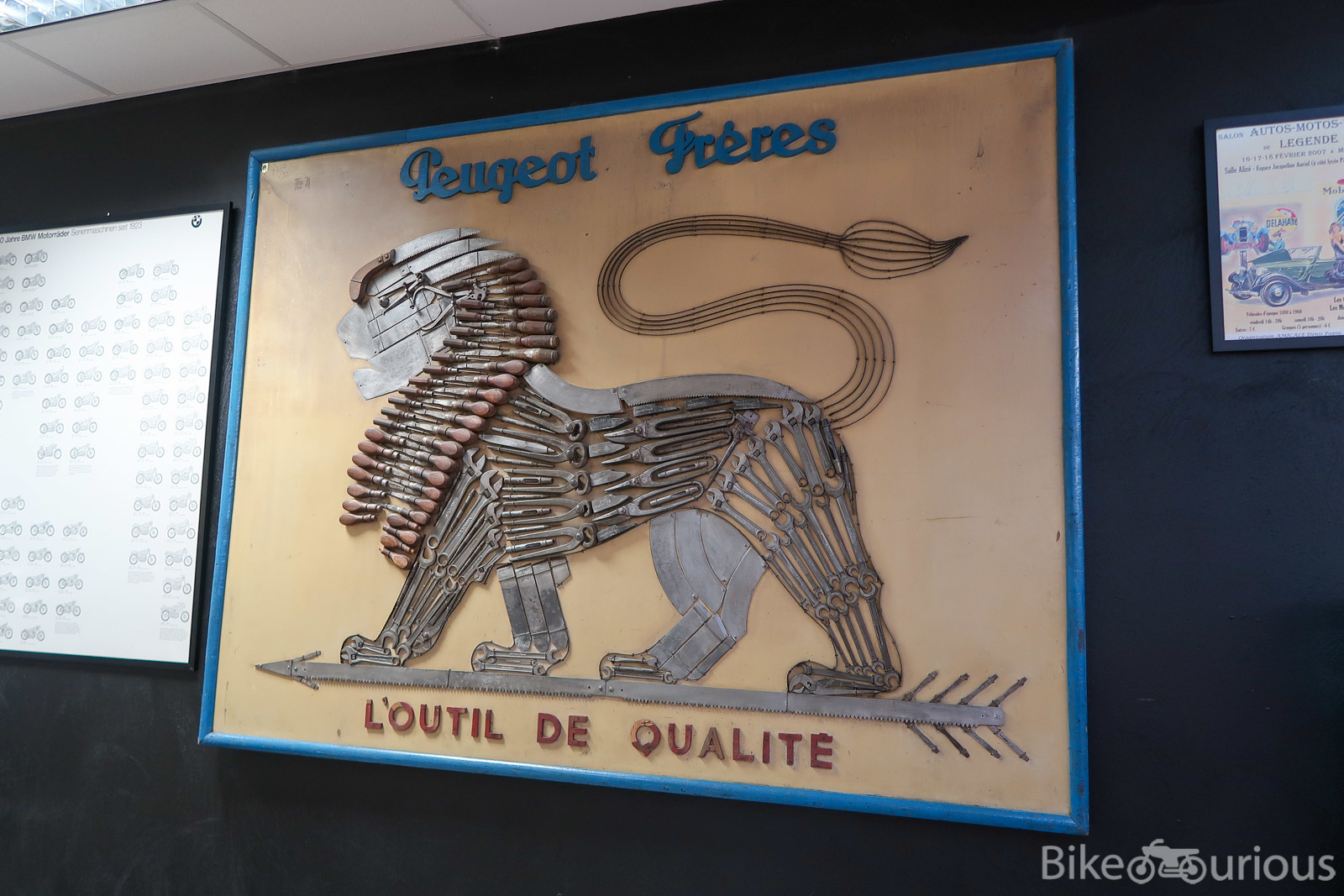 Tour over, we exited the museum via stairs that take patrons outside to a free parking lot.

That’s where my BMW R1250RS loaner was waiting, along with a beautiful view of the Andorran valley I’d be heading to next. 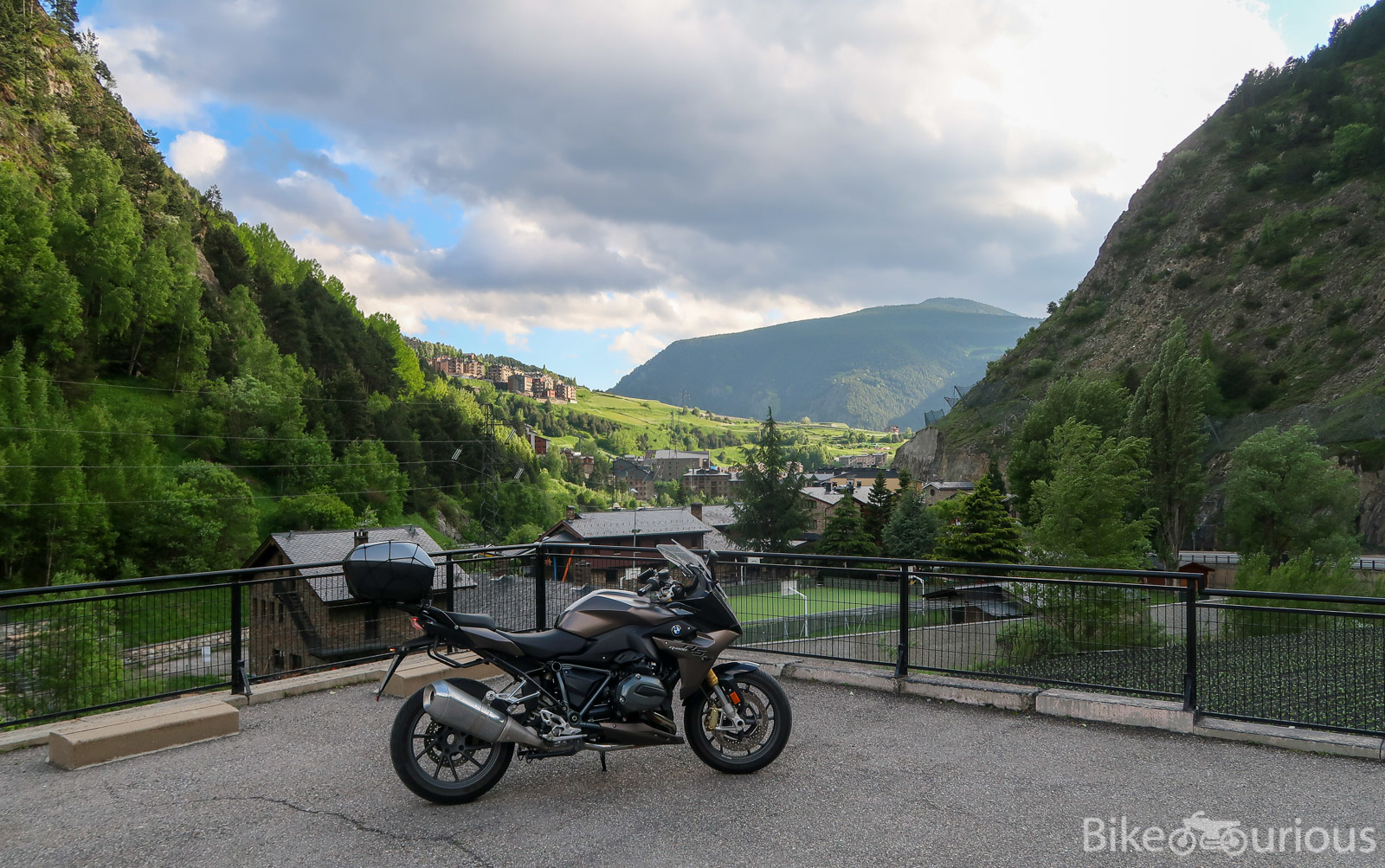 For more from Museu de la Moto, check out this album!